LowKickMMA.com
Home Other Khabib Nurmagomedov Claims Ronaldo Told Him About His Man United Return One... 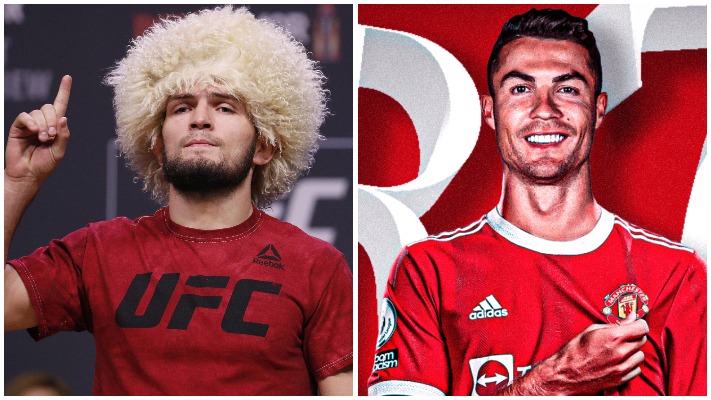 Former UFC lightweight champion Khabib Nurmagomedov knew about Cristiano Ronaldo’s decision to return to Manchester United well before the rest of the world did.

According to utdreport, Nurmagomedov said “A month ago he [Cristiano Ronaldo] told me that he was moving to MUFC. I expected this deal to take place. I think that Manchester United is more suitable for him than Juventus. For me, the transition was not a surprise.”

Ronaldo spent six years with Manchester United from 2003-2009 where he won many trophies and awards while dominating the English Premier League. Now 13 years later Ronaldo is back and ready to dominate the league once again for Manchester United.

The greatest Lightweight fighter of all time Nurmagomedov was rumored to have signed with a football team recently. Rumor had it that Nurmagomedov was signing with FC Legion Dynamo, a football club out of Russia. The team is based out of Dagestan which is the hometown of the legendary Nurmagomedov and many other fighters. Those rumors were shot down and called “fake news” by ‘The Eagle’s’ manager Ali Abdelaziz.

Nurmagomedov has been speaking about many things recently including, the “uselessness of ring girls” and how Jose Aldo can’t have another peak in his career. Nurmagomedov has been nicknamed the ‘Karen’ of the MMA world (by up and coming star Paddy ‘The Baddy’ Pimblett) with how he has been speaking recently. Although he is not fighting anymore, ‘The Eagle’ is still making headlines and fight fans are eating it up. The more Nurmagomedov talks the more headlines and things we collectively have to talk about. Nurmagomedov has also made the MMA rounds as a coach this year and is a perfect 4-0 as a coach this season.

Do you think Khabib Nurmagomedov will ever play football professionally?