LowKickMMA.com
Home UFC News Kevin Holland Responds To Stephen Thomspon’s Challenge; “I Touch Him, He Will... 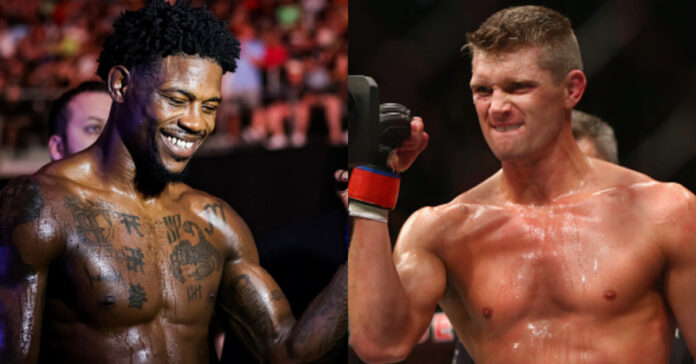 Following his drop to 170 pounds, Holland has earned back-to-back performance bonuses for his impressive victories over Alex Oliveira and Tim Means. Recognizing the potential for a highly entertaining fight, Stephen Thompson expressed his interest in meeting Holland inside the Octagon.

Following his highlight-reel finish of Tim Means at UFC 276, Holland spoke with MMA Junkie and expressed his interest in facing ‘Wonderboy’ next.

“It’s a fight down because I’m not ranked, but I kind of should be ranked,” said Holland. “After one fight at welterweight, I probably should have got ranked, because I was ranked at middleweight. It’s like you took my ranking away off of a dub. It’s really crazy, so it’s whatever. ‘Wonderboy’ and me would be a fun fight. I think we’d have a good time. All he’s got to do is sign a contract, I’m there.”

Kevin Holland Has Much to Gain in Potential Bout with ‘Wonderboy’

Sitting as the No.7 ranked welterweight in the UFC, facing an unranked fighter like Holland would be a fairly big risk for Thomspon. ‘Trailblazer’ would have much to gain and little to lose stepping into the Octagon with the former UFC title contender. On paper, it is a fairly big step up in competition for Holland, but the talkative striker believes he already has ‘Wonderboy’ figured out.

“It’s not that tricky. It’s a striker. I’m a striker,” Holland said. “It’s not that tricky. There’s nothing that he’s doing that I think that this is a puzzle that can’t be solved. The puzzle has been solved. It’s all about implementing what’s been solved in the puzzle and making it happen again. The holes that were there are still there. He’s a wonderful person, a wonderful fighter, a wonderful human being, but this is the fight game. I have a right hand. He’s been knocked out before. I touch him, he will go to sleep.”

The UFC already gave one unranked fighter the opportunity to leapfrog a majority of the top ten when Alex Pereira knocked out No. 4 ranked middleweight Sean Strickland in the first round of their UFC 276 contest. Perhaps the promotion will be willing to give Holland the same opportunity, especially considering his popularity amongst fans.

Would you like to see Kevin Holland take on Stephen ‘Wonderboy’ Thompson in a welterweight clash?