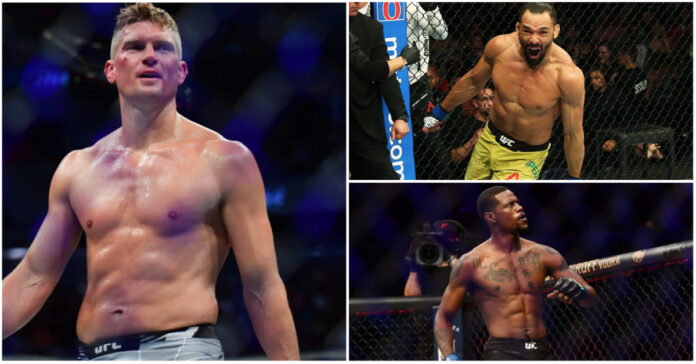 Stephen Thompson has provided an interesting insight into the state of his current UFC career, noting that he is currently waiting for the right, exciting matchups for him at this stage of his career, making it clear that he isn’t interested in opponents who simply want to “shoot in and hold him down.

“Wonderboy”, who is currently on duty as a Sensei for Season 4 of Karate Combat, was speaking to Mike Bohn of MMA Junkie when he covered the topic of his UFC career, and why he has been slightly less active recently. Offering a wide and varying explanation, Stephen Thompson had this to say:

“Yeah…I mean, it’s trying to find the right fights…the last two guys have literally just shot in and held me down and…we wanna make sure we get a good, exciting fight for the next one. We don’t want someone who just shoots in the whole time…I think that maybe has a lot to do with why it takes so long.” Stephen Thompson also made it clear that he’s “happy” doing what he’s doing with Karate Combat, “teaching karate here and…running my school back home too.”

When pressed on whether he has any specific opponent(s) in mind for his return, Thompson was quipped on the possibility of Robbie Lawler, among others. When asked about this, “Wonderboy” said:

“Yeah, absolutely!…I’ve been trying to get that fight since he was champion…I’ll be watching that fight [Lawler vs Brian Barbarena] very closely…I think that would be a fun one for sure, but it doesn’t matter to be honest.”

It seems that Stephen Thompson is more motivated and eager to get back to fighting than ever before, although he also seems to have an eye on life post-UFC, especially with him enjoying his role in Karate Combat so much. Either way, it will be interesting to see who “Wonderboy” makes his anticipated return against.