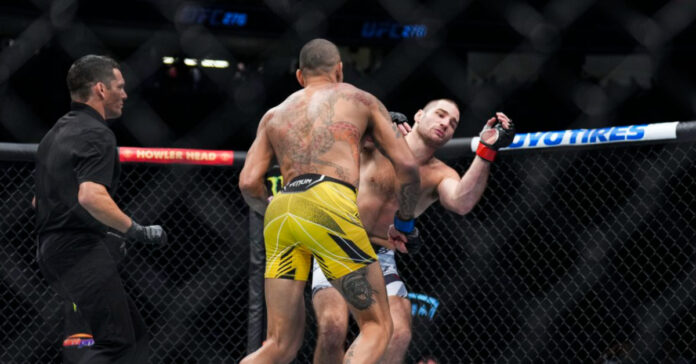 UFC middleweight contender, Sean Strickland has once again addressed his stunning first round knockout loss to Alex Pereira on Saturday night at UFC 276, thanking fans of his for providing mental support to him as he saw his run of six straight victories halted by the Brazilian.

Strickland, who entered UFC 276 as the #4 ranked middleweight contender, will likely find himself leapfrogged by the Sao Paulo striking ace come the release of the official rankings later this week.

Attempting to earn his first middleweight title tilt under the promotion’s banner, Strickland, who teased a potentially wrestling-heavy gameplan against Pereira, elected to stand with the former two-weight GLORY Kickboxing titleholder for the entirety of their one round affair.

Circling back to the center of the Octagon as Pereira began to find his range, the North Carolina native was dropped with a perfectly placed left hook, sending him to one knee before the former followed up with a quickfire pair of right hands, rendering him unconscious.

Sharing his thoughts on the defeat, the outspoken, Strickland, who had shared verbals with reigning champion, Israel Adesanya during fight week and at the pre-fight press conference, in particular, insisted that he knew himself that he was not the best mixed martial artist walking the planet at the moment.

“Hey, guys, I slept it off, and it still f*cking sucks,” Sean Strickland said of his knockout loss to Alex Pereira on his official Instagram. “But I want to give a big thanks to the fans, man. Last night was f*cking rough. I worked my ass off for less than one f*cking round. And the comments, the messages, the support I got from you guys, man, it helped me mentally, and I appreciate that.”

“I’m not the greatest fighter, I’m not the best mixed martial artist – I’ll never have a Nike sponsor, I’ll neve be on a Wheaties box,” Sean Strickland continued. “It’s not who I am. I like to fight, you know. And if I could go back and fight that guy, I wouldn’t change a Goddamn thing, you know. I wanted to stand and bang with him, I thought I was doing pretty damn good until I wasn’t. I would do it again the same exact way, it it what it is. I gotta crawl my way back to the top. …”