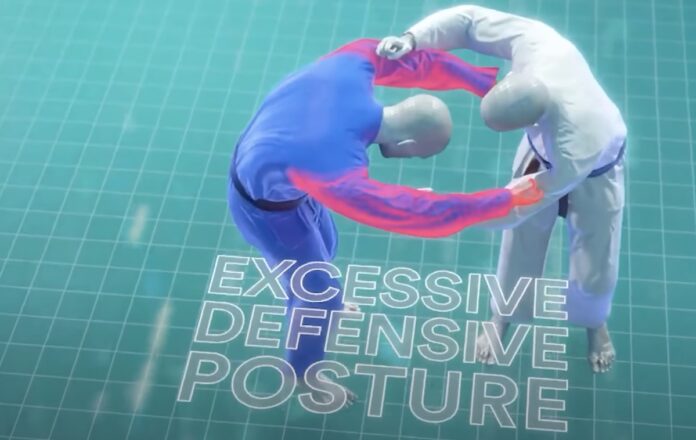 As many know, Jiu Jitsu was created based on the teachings of Judo. The two martial arts have many similarities, but are very different from one another.

Let’s do a comparison and list the differences between Judo vs Jiu Jitsu. Going over everything from how they were developed, their principles, belts, Gis, and competition rules. We’ll also go over the positives of cross training between Judo and Jiu Jitsu.

History of Judo vs Jiu Jitsu

The history of Judo

Judo was created by Grandmaster Jigoro Kano. Grandmaster Kano became a protege of Fukuda Hachinosuke when he was a teen. Learning a grappling style called Tenjin Shinyo-ryu style of jujutsu.

What Kano created would be known as the art of Judo. Opening his first Judo school in 1882 with just 9 students in the school’s first year in existence.

Judo was able to grow at an exponential rate thanks to the brilliant idea of Kano. He wanted to spread his art of Judo just like how a religion spread.

Before anyone knew it, Judo was practiced on nearly every continent in just 50 years. Today it is even bigger than Grandmaster Kano could have ever imagined.

The history of Jiu Jitsu

Through the spread of Judo, the art of Brazilian Jiu Jitsu was able to be created. A few of Kano’s top students, including Judo master Mitsuyo Maeda.

Maeda immigrated to Brazil with the help of a Brazilian politician named Gastao Gracie, who he befriended. Gracie helped Maeda put on Judo demonstrations in different cities within Brazil.

At one of these demonstrations, Gracie’s son Carlos Gracie was in attendance. Carlos became one of Maeda’s first students along with Luiz Franca, who also helped create Jiu Jitsu.

For a few years, Carlos learned under Maeda for a few years before showing his brother Helio different Judo techniques. They were both small in stature, so they began developing their own style based off of Judo.

What they helped create would become known as Brazilian Jiu Jitsu. BJJ practitioners would fight to prove the effectiveness of their martial art over the years within Vale Tudo fights.

Then after the first UFC event aired, the world was exposed to the effectiveness of Jiu Jitsu. Today, it is one of the most popular and fasted growing martial arts in the world.

Both Judo and Jiu Jitsu are grappling martial arts, but there is one big difference that sets them apart. That is their different objectives

The objective of Judo is to grab a hold of an opponent and take them down with a throw, sweep, or trip. Judo does also teach ground techniques, but they are secondary to getting an opponent to the ground.

For Jiu Jitsu, the main objective is to control an opponent on the ground. Then once you establish control, you finish the fight with a choke or attack an opponent’s limbs.

Jiu Jitsu also teaches takedowns that it adopted from Judo and wrestling, but their secondary to the ground techniques.

How long does it take to get a black belt in Judo vs Jiu Jitsu?

A Judo Gi and a Jiu Jitsu Gi are made of the same material and look similar from a glance. But they’re noticeably different from one another.

A Judo is a bit heavier and more baggy than a Jiu Jitsu Gi. This is because the Gis are designed to be grabbed, so a Judoka can execute throws and sweeps.

The sleeves and pant legs are also far shorter on Judo Gis than with Jiu Jitsu Gis. They also usually only come in blue and white, because those are the only permitted colors within Judo competitions.

Jiu Jitsu Gis are a bit slimmer and lighter than standard Judo Gis. The jacket sleeves and pant legs are a bit longer on standard Jiu Jitsu Gis. This allows for Jiu Jitsu practitioners to grab hold of their opponent’s Gis and play different guard styles.

Jiu Jitsu Gis also come in a wide variety of colors compared to Judo Gis. But only white, blue, black Gis are permitted within IBJJF competitions.

The IJF is the top Judo federation in the world that oversees the world’s biggest Judo competitions. This includes the Judo World Championship and the Judo matches that are held within the Olympics.

In Jiu Jitsu, the IBJJF was originally the Confederação Brasileiro de Jiu-Jitsu(CBJJ). They created a new organization called the IBJJF when they went international in the early 2000s.

Judo matches are very different compared to Jiu Jitsu matches. Both have different rules and objectives to win a match.

The rules of Judo matches

The rules of Jiu Jitsu matches

Jiu Jitsu has a point system, while in Judo, there are two ways to win a match.

To win in Judo you must either score an ippon or two waza-aris.

Ippon: An ippon is a perfect throw performed with control and power, where the opponent lays flat on their back. Also a pin lasting for 20 seconds, a strangulation or armlock attacking the elbow.

Waza-Ari: A waza-ari is a half point, where a Judoka performs a throw, but it isn’t perfect. Also a pin lasting 10-19 seconds and a Judoka will win if they’re awarded two waza-aris.

The Jiu Jitsu point system is far more diverse than in Judo. It includes:

Ways to win in Judo vs Jiu Jitsu

Ways to win a Judo match

To win a Judo match, you can win by either a successful ippon or two waza-aris. You can also win by disqualification if the opponent is penalized by the official.

There are three ways to win a Jiu Jitsu match. You can either win by:

You can also win by disqualification like in Judo if the official penalizes your opponent for an infraction.

MMA fighters with background in Judo vs Jiu Jitsu

Both Judo and Jiu Jitsu have produced some great MMA fighters. Here are some of the most prominent fighters that each martial art has produced.

Is it beneficial to cross train between Judo and Jiu Jitsu?

Yes, it is very beneficial to train in both Judo and Jiu Jitsu. Especially for Jiu Jitsu, because it will allow you to get your opponent to the ground. It will also benefit you and make you an overall better martial artist to know both grappling styles.