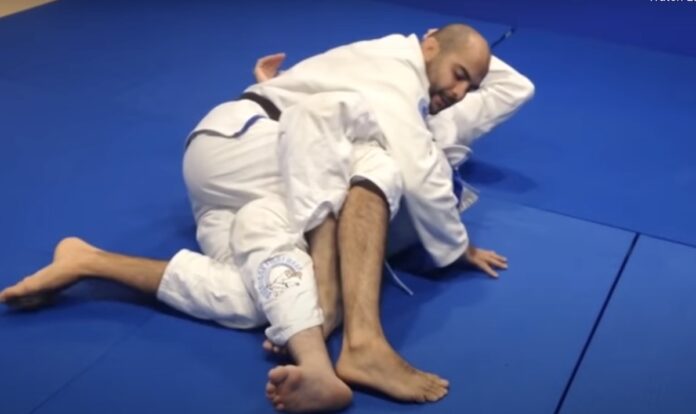 In BJJ, there are now numerous types of guards that you need to learn to defend against and pass. That is why we’ve put together this list of guard passes.

Below is a list of techniques to pass just about every type of guard within Brazilian Jiu Jitsu.

Your first step for this pass is close your knees and press them against your opponent’s hips. This keeps them from easily breaking your posture to set up a sweep or submission.

Next, take double lapel grips and push them into your opponent’s armpits. Once you take these grips, your opponent will have to break the grips before trying to break your posture.

For the next step, you’re going to keep your grips and come up to your feet. Then you’re going to put your knee between your opponent’s legs and begin to open their guard.

You then step back with your other knee and bend your knee to open your opponent’s guard. From there, you can do any type of open guard pass you wish.

One of the best ways to pass half guard is with a knee cut pass. There’s various ways to do this pass and their all effective.

For this variation, start by grabbing a sleeve grip on your opponent. This grip will help prevent your opponent from turning on their side and posturing up..

Next, step to the side and drive your knee in half guard to the mat. Then grab above your opponent’s elbow and slide into side-control.

The lockdown half guard can be annoying to deal with and it stalls the action of a roll. But it is beatable when you use a pass like this one.

Your naturally reaction will be to move up, but you need to start the pass by moving your body down. Then from here, all you do is bend your knee our and switch your base.

Butterfly is a super effective guard to use, but it’s pretty easy to pass. One butterfly guard pass you can do is the wheel turn.

While in butterfly guard, cross grab your opponent’s knee and behind their back to their far shoulder. Once you establish these two grips, all you do is turn your opponent like a wheel and pass to side-control.

Collar and sleeve guard is a basic guard that you’ll often run into while training. Here is a method to defend against it.

When someone used a collar and sleeve guard, they’ll often put their foot on your bicep. The first step is to break the sleeve grip by turning your hand out and taking your own grip.

Your other hand is going to come inside your opponent’s leg and take a pant grip. Now your open just has an open guard that you can pass with any type of pass you like.

Deep half guard is widely popular and hard to pass. This deep half pass is simple and effective.

Now, with the opponent’s arm controlled, take your free leg, and swing it over your opponent’s head. Once you pass your leg free, you’ll begin to pass half guard and go into side-control.

Take a collar grip and drive your opponent’s head away from their body as you side into side-control.

The De La Riva guard is widely used ib BJJ at all levels. It is a guard that you must know how to pass in order to advance your Jiu Jitsu game.

Next, you’re going to do a small backstep to take their foot off your hip and then step back. When you come back, you need to squat down on your opponent’s leg to secure your posture.

Once you’ve secured your posture, push your opponent’s knee as you loop your hand collar gripping over the knee. Now, drive your knee in between your opponent’s legs, drive it to the mat, slide out, and go to side-control.

Start by driving your knee in and take your grips. One grip on your opponent’s collar and a cross grab on their knee.

Pull the collar grip up as you push the knee grip down to lock your opponent in place. Now, you’re going to drive your knee in and then quickly out over your opponent’s shin.

Keep your grips and connect your knee to their hip to complete the pass and take side-control.

The spider guard is a very popular guard among guard players in Jiu Jitsu that is quite effective. Luckily, there are various ways to pass spider guard, which includes this easy pass.

In spider guard, start by pushing one of your opponent’s knees forward and pulling the other back. Next, circle your hand under the knee you pushed and counter grab their with inside knee grip.

Then, drop your head down, hold the opponent’s head, put down shoulder pressure, and pass.

If you train in No-Gi Jiu Jitsu, then chances are that you will run into rubber guard. Here’s how you can pass the basic mission control position in rubber guard.

Put your hands on the mat and hop to your feet as you bring your head over your partner’s head. Once you’re up, youre going to turn your elbows down towards the floor.

Now, you’re going to limp arm out and stand straight up to get out of the rubber guard. Ending up in an open guard position and ready to pass.

Lasso guard is highly technical and can be difficult to try and pass. This lasso guard pass is a good one for when the opponent has a tight lass with their foot on your back.

Start by pushing your opponent’s knee down and drop into the knee slice position. Don’t try to pass just yet or you’ll be put into a bicep slicer or swept.

Instead, take a collar grip, drop your shoulder to your opponent’s chest, and step to the side. Now, hug the head, put down heavy shoulder pressure, and slide out your knee to complete the pass.

Some guard players will even mix the lasso guard and spider guard into a variation of both guards. But a stomp and slide pass is a great option to get out of this guard.

Start by taking a collar grip with your arm that is stuck in the lasso. Then grab a pant grip on the spider guard side and turn the opponent’s knee towards you.

Now with their leg in place, you’re going to stomp on their leg to break the spider guard grip. After you stomp, take a c grip on your partner’s leg doing the lasso, and step around their leg.

Your opponent will react by throwing their leg back over, so you let them. As they take it back, you’re going to knee cut pass right into side-control.

Lapel guard or worm guard is one of the most annoying guard to get stuck in. More people are playing this guard now more than ever and you must know how to deal with it.

When you’re standing above you’re opponent and they go to pass your lapel, this is when you must react. Take a wide stance that will force your opponent to sit up.

This is the reaction you want to take a grip on the back of their Gi. Next, you’re going to take two steps to pass your opponent’s guard.

Step out with your inside leg and place your knee on their elbow, and then do a backstep with your other leg. Now, use your grips to pull your opponent down and take side-control.

X guard is another widely popular guard that allows for multiple sweeps and entries to the back mount. That is why you need to know how to defend against this guard.

Take a pant grip on the leg that’s the top hook and put your weight on your back leg. Then in one motion, you’re going to step your lead up and loop it over your opponent’s leg.

Bringing your leg between your opponent’s legs and then stepping to the side to take side-control.

Along with x guard, you will have to know how to defend against the single x guard. The variation of x guard that many grapplers commonly transfer to for sweeps and leg locks.

Start by driving your knee down on your opponent’s body to create pressure and take away space. Next, you’ll have to address the foo that is on your hip.

Grab the top of your opponent’s foot as your bring your hip forward to clear the foot away. Right you take the foot away, you need to drop your hip and close the space, so they can’t put it back.

Next base on the mat and bring your knee in and slide back to land in half guard. Now, turn your toes down as you back step out of half guard and into side-control.

Shin to shin guard is a guard that is used for sweeps and often as a transition to x guard variations. Your first step is to not let your opponent connect their shin to your shin.

Pass shin to shin guard by stepping between your opponent’s legs, getting an underhook, and knee cutting out.

More grapplers are playing half guard more than ever and one particularly popular version is the z guard or knee shield.  Here is a great knee shield pass option in the Gi.

Start by taking a collar grip on your opponent and rolling your elbow in to pull them forward. Then, take your other hand and slide it between your opponent’s legs palm down.

Next drop your head down and start to put heavy on your opponent to keep them in place. Now, you’re inside knee is going to cut across your opponent’s shin as you keep the pressure with your head.

Pull your collar grip in and keep downward pressure on your opponent as you walk your hips out to side-control.