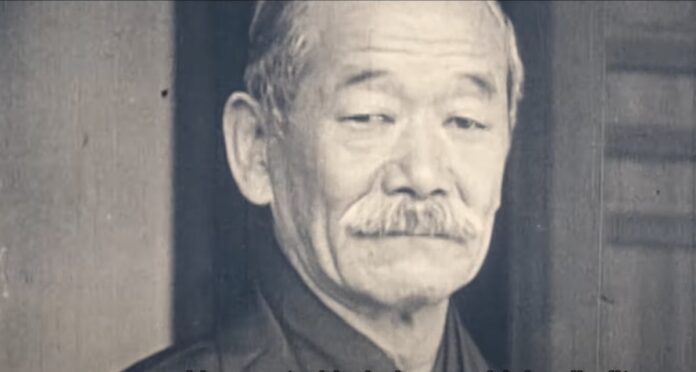 Modern martial arts would not be what they are today without the work of Judo Grandmaster Jigoro Kano. Kano not only created the art of Judo, but he changed how martial artists view and practice self-defense.

Here is the complete story of the founder of Judo, Jigoro Kano. Detailing how his rough childhood led to a lifelong love of martial arts and his development of Judo. We’ll also detail his professional life and how he was able to introduce Judo to an international audience.

Jigoro Kano was born in 1860 and grew up in a Japanese village called Mikage. He was born on December tenth, but Japan switched its calendars to the Gregorian-based system in 1873. This switch is why Kano’s birthday is celebrated on October 28th in Japan and not in December.

He came from a rich family that earned their wealth from brewing sake. Since Kano’s father was an adopted son, he didn’t get into the family business.

Instead, his father would work as a lay priest and clerk for a shipping line. Kano’s father believed in the power of education and put his son in the best schools.

He would be taught by everyone from neo-Confucian scholars and learn multiple languages, including English and German.. After his mother died when he was nine, Kano’s father moved to Tokyo and enrolled him in private schools.

Jigoro was a small child that stood at 5 ft 2 in(1.57 m) and only weighed 90 lbs(41 kg). His small stature made him an easy target for bullies, and he would constantly get beat up as a child.

Kano’s father ignored the bullying and told his son to focus on his studies. Despite his father ignoring the situation, Jigoro wanted to learn to defend himself.

A friend of his father named Nakai Basai, who was a shogun guard, would show Kano a few jujutsu techniques. An old form of grappling with techniques designed to beat bigger and stronger opponents.

This intro sparked an interest in martial arts within Kano, but his father discouraged his son from pursuing this idea. But thanks to Jigoro’s insistence, his father finally agreed under the condition that he mastered jujutsu.

When Jigoro was seventeen, he began attending Tokyo Imperial University. There he began looking for bonesetters, which were doctors that generally also practiced jujutsu.

He met Yagi Teinosuke, a jujutsu practitioner who referred Kano to Fukuda Hachinosuke. Another bonesetter who taught Tenjin Shin yo-ryu in a small room next to his practice.

Fukuda would take on Jigoro as one of his students, which would be the start of Kano’s formal training. Hachinosuke’s teaching methods consisted of newer students taking falls for senior students.

This was to enable new students to learn how to fall correctly and see the mechanics of the technique. Fukuda also believed in free-form training, which allowed Jigoro to try different methods.

He began trying various techniques due to having trouble against his sparring partner, Fukushima Kanekichi. Kano initially tried sumo techniques that didn’t work and would later try western wrestling techniques from a book he discovered.

One of those techniques that proved to be incredibly effective was the fireman’s carry. This move would later be called the kataguruma within Judo when Kano started developing his own martial art.

Three years after learning under Fukuda, Kano participated in a jujutsu demonstration in front of Ulysses S. Grant. The current US president was visiting Japan for meetings and taking in the country’s culture.

This demonstration took place in the home of Shibusawa Eiichi, who is considered the father of capitalism in Japan. Another jujutsu instructor named Isa Masatomo also participated in the demonstration.

Kano’s instructor Fukuda Hachinosuke would die shortly after the demonstration and Jigor would begin training under Masamoto. Isa Masatomo was 62 and short, but incredibly strong from years of training.

Due to the years of rigorous training under Fukuda, Kano became Masatomo’s teaching assistant.

In 1881, Iso passed away, and Kano searched for another teacher. This time, he would find a teacher named Iikubo Tsunetoshi, who was proficient in throwing techniques. The type of jujutsu that Tsunetoshi practiced was called Kito-ryu.

Jigoro believed that these throwing techniques were some of the most effective moves that he ever learned. They would later play an important role when Kano began developing Judo.

It was dated October 1883, and the document is on display at the Kotakan Judo HQ in Tokyo, Japan.

Once Kano became a certified teacher, he opened his own school with the support of his teacher Tsunetoshi. His master would attend his students’ classes and would later become Kano’s student after being consistently beaten in sparring.

This was when Kano started transferring away from jujutsu to create his own martial art. When deciding the name of his martial art, Kano would combine the “ju” and “do.”

Since Jigoro was of smaller stature, his ability to administer these techniques on larger opponents proved Judo’s effectiveness.

When Jigoro Kano set off on his own to teach, he opened his own school in 1882. He would call his school the Kodokan Judo Institute.

Initially, the Kodokan was a small room with only twelve mats owned by a local Buddhist temple. In 1890, the school moved to a larger location to a space that could hold sixty mats.

Twelve years later, Kano would incorporate the Kodokan to enable the school to reconstruct to benefit future students. The Kodokan would move one more time during Kano’s lifetime in 1934 to a space that held 510 mats.

Kano’s school would move one more time to its permanent residence in 1958. An eight-story building that not only holds 1200 mats but is also the home of the International Judo Federation (IJF).

Judo was able to spread throughout Japan due to Jigoro Kano’s professional life. When he wasn’t teaching Judo, he was a lifelong educator that taught at numerous private schools and universities.

Kano’s work led to him earning a position as the director of primary education at the Ministry of Education in 1898. This position allowed Kano to travel throughout Europe and learn different teaching methods, as well as share his martial art.

Jigoro would use his connections to influential members of Japanese society to his benefit. These connections would lead to Judo and Kendo being officially taught in Japanese schools.

In less than thirty years since creating Judo, Kano had spread his martial art throughout Japan.

He used the same methods of how many religions were able to spread internationally to spread Judo. Kano would appoint his best students to different places around the world to teach Judo on various continents.

There would also be many international students that would travel to Tokyo to learn at the Kodokan. In only a few decades, the art of Judo would become internationally practiced worldwide.

Not only did Jigoro Kano develop Judo, but he also developed the very first martial arts kimono or Gi. To meet the grappling demands of Judo, Kano realized that specialized training clothes needed to be created.

Kano would get inspiration from the heavy hemp jackets that Japanese firemen would wear during the late 1800s. The Judo uniform he created would become known as the “Judogi.”

Martial arts developed later on, like BJJ, Karate, and Sambo, would also adopt variations of the martial arts Gi.

As mentioned in the previous section, Jigoro Kano was a lifelong educator. The two biggest passions in his life were martial arts and teaching.

Throughout his life, he taught at the most prestigious schools in Japan. Also serving in multiple positions within Japan’s Ministry of Education.

Along with being a lifelong teacher, Kano was also the first Asian member of the International Olympic Committee(IOC). He served on the IOC from 1909 to 1938 and was instrumental in making Judo an official Olympic sport.

The very first Japanese martial art/sport to be given this honor.

Not only did Kano create Judo, but his influence had a hand in helping various other martial arts develop. Those other martial arts include Brazilian Jiu Jitsu, Sambo, and Karate. Freestyle wrestling would also adopt techniques from Judo.

Brazilian Jiu Jitsu is a direct descendant of Judo and adopted most of its techniques from the martial art. Without the creation of Judo, BJJ would not exist.

Sambo is another martial art directly influenced by Jigoro Kano’s martial art. One of the key developers of Sambo, Vasili Oshchepkov, spent years at the Kodokan learning under Kano.

Oshchepkov would take what he learned from Judo to help develop the Russian martial art of Sambo.

Believe it or not, Jigoro Kano also had a hand in helping Karate become nationally practiced in Japan. Karate co-founder Gichin Funakoshi traveled to Tokyo to do a Karate demonstration in front of the Ministry of Education.

Kano was in attendance for this demonstration and was impressed by what he saw. He would invite Funakoshi to do another Karate demonstration at the Kodokan, which was a big success. Leading to the further growth of Karate within Japan.

When developing Judo, Jigoro Kano had three ideas in mind for his martial art. He created Judo to encompass self-defense, a physical culture that stressed good health and moral behavior.

“Since the very beginning, I had been categorizing Judo into three parts, rentai-ho, shobu-ho, and shushin-ho. Rentai-ho refers to Judo as a physical exercise, while shobu-ho is Judo as a martial art. Shushin-ho is the cultivation of wisdom and virtue as well as the study and application of the principles of Judo in our daily lives. I therefore anticipated that practitioners would develop their bodies in an ideal manner, to be outstanding in matches, and also to improve their wisdom and virtue and make the spirit of Judo live in their daily lives.

If we consider Judo first as a physical exercise, we should remember that our bodies should not be stiff, but free, quick and strong. We should be able to move properly in response to our opponent’s unexpected attacks. We should also not forget to make full use of every opportunity during our practice to improve our wisdom and virtue. These are the ideal principles of my Judo.”

Jigoro Kano invented numerous techniques and adopted many others from various forms of jujutsu. Here is a list of some of the techniques Kano taught within Judo.

The Legacy Of Jigoro Kano

Grandmaster Jigoro Kano not only created Judo but also trained how people viewed and practiced martial arts. Modern martial arts would not be as they are today without the work done by Kano.

If you’re a grappling practitioner of any kind, you must pay respect to Jigoro Kano. Because without him, BJJ, Sambo, and even MMA would probably not exist.