LowKickMMA.com
Home UFC News Jon Jones Is ‘Ready to Go’ According to Dana White; Will Fight... 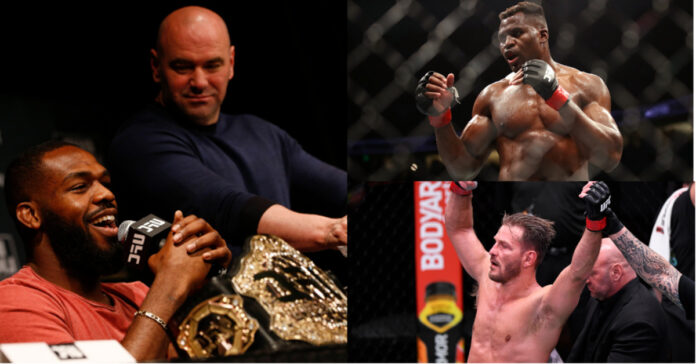 After more than two and a half years on the shelf, former UFC light heavyweight champion Jon Jones is ready to return according to UFC president Dana White.

The last time we saw Jones in action was at UFC 247 when he successfully defended his light heavyweight title against Dominick Reyes. That was in February 2020. Following the victory, ‘Bones’ vacated the title with the intention of moving up to the heavyweight division after years of dominance at 205 pounds.

During an appearance on “The Jim Rome Show,”  Dana White stated that Jones is ready for a return to the Octagon. It’s just a matter of lining up an opponent to welcome him back.

“Jon Jones is ready to go,” White said. “We’re just waiting for an opponent. It’s either going to be Francis (Ngannou), depending on how long his knee is going to take to recover, or Stipe Miocic.”

“It’s very interesting because I’m a huge believer in ring rust,” White said. “But for all the negative things you could say about Jon Jones and his personal life and things that have happened, he’s the best. He’s definitely the best of all time.”

Despite His Time Away, Jon Jones Has Stayed in The News

Despite being away from the bright lights of the UFC for the last few years, Jones has still found himself under an unsavory spotlight. In September 2021, Jones was arrested in Las Vegas and charged with misdemeanor battery domestic violence, and injuring or tampering with a vehicle. It was just another item on a laundry list of legal troubles Jones has found himself in over the past several years.

The UFC’s current heavyweight champion Francis Ngannou has been out of action since his title defense at UFC 270 against Ciryl Gane. ‘The Predator’ underwent knee surgery following the bout and is slated for a late 2022/early 2023 return. Considering the very public contract dispute that Ngannou had with the UFC, it is still uncertain if that return will be in the Octagon or the squared circle.

If the UFC opts to go with Jones vs. Stipe Miocic, it would likely be to crown an interim champion, or a new undisputed champion should Ngannou opt to walk away from the promotion.

Miocic last competed in March 2021 when he lost the heavyweight title to Ngannou via a second-round knockout.