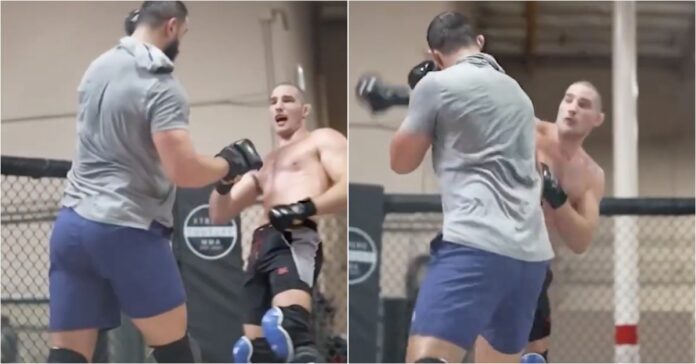 Strickland, who is in the midst of an impressive five-fight winning spree, most recently bested Uriah Hall with a unanimous decision win in his first headlining bout under the promotion’s banner back at UFC Vegas 33 back in July.

The outspoken North Carolina native was slated to return against former middleweight champion, Luke Rockhold at UFC 268 back in November at Madison Square Garden, until a herniated disc injury forced the former middleweight titleholder from proceedings.

During exchanges, Sean Strickland praises Reyes’ striking before telling the Californian to stop laughing, telling him, “I’m here to hurt you” and that “You’re here to play”.

Strickland then blocks a shot from Reyes before telling him “I’m trying to f*cking put you down.” Eating a right-hand counter soon thereafter, Strickland exclaims, “Here we f*cking go.”

Back in October 2020, Strickland landed his second consecutive victory of his current streak in a unanimous decision win over Wales native, Jack Marshman, repeatedly urging him to throw in the final minute of the three round fight, and asking him “why won’t you fall, Jack?” Following the klaxon and upon waiting on the official result, Strickland then asked, “Jack, why is your head made of steel?”

Amongst his Octagon victories, the Xtreme Couture trainee has bested the likes of Krzysztof Jotko, Brendan Allen, Nordine Taleb, Court McGee, and Alex Garcia to name a few.