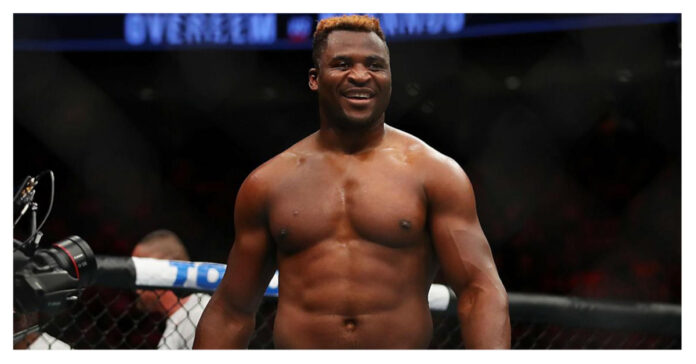 Francis Ngannou expects to be back inside the cage at the end of this year or at the start of next.

Reigning UFC Heavyweight champion Francis Ngannou has remained out of action since his latest outing against Ciryl Gane at UFC 270. He extended his win streak to six with a strategic display of grappling in the bout. Ngannou would later reveal that he went into the fight with knee injuries that needed surgery and was advised against taking the match by the doctors.

Francis Ngannou could be back in December or early next year

In an interview with TMZ Sports, Francis Ngannou talked about recovering from the surgery and shared when he will likely return to action.

“It’s getting better,” Ngannou said. “Pretty good, it wasn’t easy but we’re getting there. It’s been only three months so yes, I’m still doing physical therapy. If everything goes well, I will be ready by the end of the year because it is going to be nine months. So let’s say late December or early next year.”

‘The Nigerian Nightmare’ is stuck in a deadlock with the UFC over extending his contract. He had only one fight left before the Gane bout and refused to sign a new deal, a major risk on his part that could’ve seen his stock diminish had he not come out on top of that contest.

Ngannou’s contract dispute with the UFC

During the same interview, Ngannou indicated the struggles he’s facing when dealing with the promotion. A potential matchup between Jon Jones and Stipe Miocic has been rumored for the interim title but no official confirmation has been announced yet.

Even if Ngannou heals up, the major sticking point of signing a new deal with the UFC will throw a wrench in their plans if they can’t be on the same page.

“For now, let’s fight for the situation and get everything squared up,” Ngannou said. “Then when I get close to the return we will see where the landscape is at because a lot of things can happen.”

He shared that the surgery was the construction of ACL and MCL. Ngannou has been rallying for a crossover bout with Tyson Fury and may run down his contract by sitting out for the rest of the year.