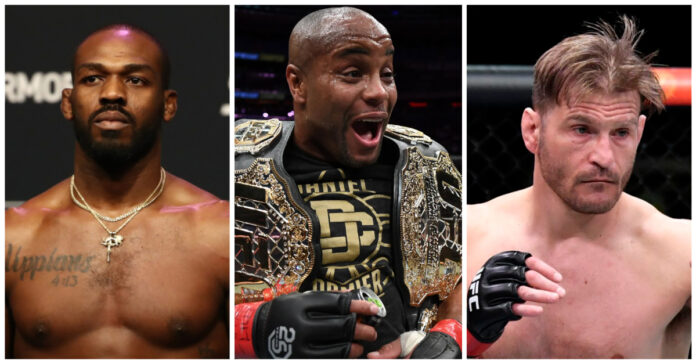 Former two-division UFC champion Daniel Cormier is doubtful about whether Stipe Miocic will be able to overcome Jon Jones.

I agree with you 100% that he [Jon Jones] is still the greatest of all time, White said in an interview with MMAUnderground. “Yeah, obviously, we’ve got Francis right now, his knee, we’re waiting on that, see how long that’s going to be. Then, you know, him and Stipe [Miocic] probably makes sense. Either Vegas or New York.”

So it seems as if UFC fans will be treated in what could turn out to be one of the all-time great matchups. We have not seen Jones since his controversial win over Dominic Reyes back in August of 2020 and has since decided to move up to heavyweight in hope of capturing gold in a second division.

Miocic on the other hand has not been in the Octagon since his devastating knockout loss to Francis Ngannou in March of last year, a win in this would have marked his fifth successful title defense. It has also been presented that the interim heavyweight title may be put in place for the fight. If he were to win, Miocic would become a three-time UFC heavyweight champion.

One man who could provide a great insight is former light-heavyweight and heavyweight UFC champion, ‘DC’. Having fought both men a total of five-time (Jones-2, Miocic) Cormier knows the pair better than most.

In an interview with TheMacLife, Cormier gave his two cents on the potential matchup. “They’re both tremendous mixed martial artists Cormier began. “But here’s the thing. And I will say this as truthfully as I possibly can. When I lost to Jon Jones, I did everything in the rematch in the first fight, and I lost.

“I did everything possible in that rematch to win and the dude still got me. I gave my absolute best in training, in preparation, I was as sure as about myself going into that fight as I’ve ever been.

“Stipe Miocic, very very good,” added Cormier. “But I couldn’t do all the things that I did for those Jones fights. I feel like if I fought Stipe Miocic as prepared as I was the second fight with Jones, I never would lose to him. I don’t feel that way with Jones.

“I still believe I would win fights, but I do believe that he could win fights. I do feel like if I was prepared to the best of my ability, I would never lose to Stipe and I really respect Stipe. I just think that the matchup is not good for him. Great fight. I’m excited about it but when I look at these two, I don’t know if Miocic gets past Jones. I don’t like Jones, but he can fight.”

Do You Agree With Daniel Cormier