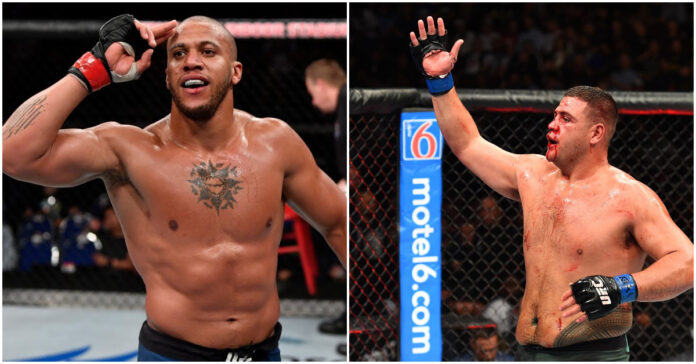 Ciryl Gane is scheduled to take on Tai Tuivasa in UFC’s first outing in Paris.

Former UFC interim Heavyweight title holder Ciryl Gane will face off against the rising prospect Tai Tuivasa in the headlining match of UFC Fight Night Paris on September 3. Gane is reeling off the first professional loss of his career in his latest unification bout with the reigning division champ Francis Ngannou.

Meanwhile, Tuivasa will be going into the cage after racking up a five-fight win streak. He dispatched all five of his previous opponents by a knockout or a technical knockout with a notable win against Derrick Lewis in February. The third-ranked contender in the division gets a significant level up in competition and is likely to get an inch closer to the gold if he comes out on top over the top contender.

UFC officially announced the matchup on Twitter this Wednesday.

It was previously reported that the UFC was working on a big show in Europe. Talks of the rumored matchup were ongoing but the company hadn’t made any official statements until the tweet.

Gane gets to fight in his hometown for the first time

For the first time ever since the legalization of MMA in France in Jan 2020, Ciryl Gane will get to compete in front of his hometown this September. Gane is widely considered to be one of the most athletic fighters, especially at heavyweight where the athletes don’t necessarily have a fast movement.

Prior to his loss to “The Predator”, Gane was on a seven-fight win streak in the UFC that saw him defeat Derrick Lewis, Alexander Volkov, Jairzinho Rozenstruik, and Junior dos Santos.

Gane opened as the favorite against Ngannou in their title unification bout but was unsuccessful in securing the title. His outing with Tuivasa is being looked at as a title eliminator matchup where the winner will either likely get a shot at the strap or go through a top contender bout.

Are you excited to see Ciryl Gane fight Tai Tuivasa?