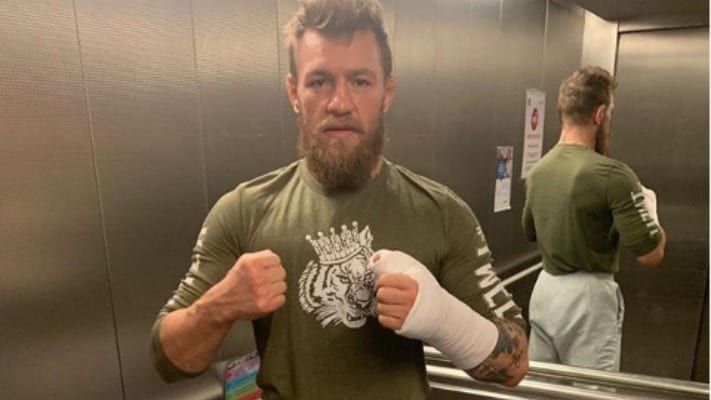 McGregor has been very vocal about his intentions to return to the Octagon soon. UFC President Dana White has said he expects the Irishman to fight before the year is over. Earlier today (Mon. June 16, 2019) McGregor’s longtime head coach, John Kavanagh, was in-studio for “Ariel Helwani‘s MMA Show” and was asked about “Notorious.”””

In regards to the injury, Kavanagh detailed McGregor’s recent injury did, in fact, happen during a sparring session while preparing for a fight. McGregor subsequently underwent surgery and is currently rehabbing:

“It was sparring,” Kavanagh said. “I set up a spar, it was a good spar. He just clipped a guy in the back of the head and damaged his hand. But he went to see a really good hand surgeon. He’s undergoing therapy right now.”

“Um, yes,” Kavanagh admitted. “I always love the Diaz trilogy, I’ve said that from the start. I think that’s – I’m really looking forward to seeing how Nate looks in his – the fight that’s coming up. As a fan, that’s very exciting. Justin Gaethje kind of reminds me of that similar style, he can take a tremendous amount of punishment and keep coming forward.

“Honestly, if it’s Conor excited and motivated and pushing himself hard – it doesn’t matter all that much to me. Anyone in the UFC at the level that Conor will be fighting are good opponents, different challenges – if you’re going to put a gun to be, it would be the Diaz trilogy. That would be for me.”

McGregor hasn’t competed since October of last year when he was defeated by Khabib Nurmagomedov. The pair headlined the UFC 229 pay-per-view (PPV) in Las Vegas. Khabib forced McGregor to tap in the fourth round with a neck crank, handing him his second loss under the UFC banner.

The Irishman is desperate for a rematch with “The Eagle,” but will likely have to earn a second go with another win. As for Khabib, he’s scheduled to unify his lightweight title with interim champion Dustin Poirier at UFC 242 in September.