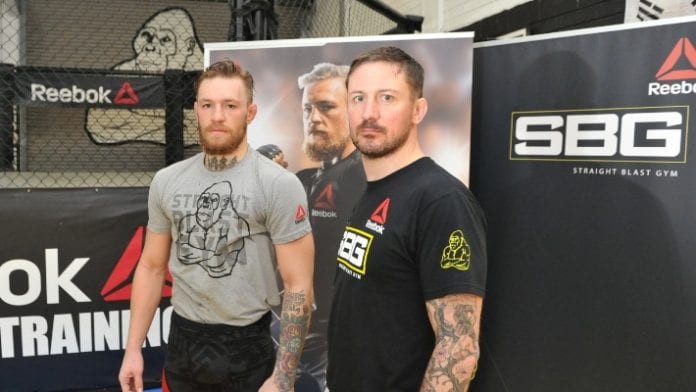 Martial arts has been part of John Kavanagh’s life almost since he was born. At 4 years old, John started learning Kenpo karate at the encouragement of his father and would train throughout his childhood.

At 12 years old, he earned his karate black and would continually train until he finished school. While living on his own, John started studying medical engineering at the Technological University of Dublin.

He continued to study striking martial arts while studying in college. The main person he would study was Geoff Thompson, who was known for his knowledge of street fighting techniques.

Although, when John Kavanagh was 18, he was nearly beaten to death by a group of men in the street one night. Leaving him hospitalized and in critical condition.

After the beating, John started to rethink his views on martial arts and his skills.

John started looking for how to improve his fighting skills and discovered the Ultimate Fighting Championship. Once he saw the first champion Royce Gracie, he became obsessed with learning Jiu Jitsu.

When he wasn’t studying, Kavanagh would get a group of friends together and practice various techniques. Anything he saw in the UFC videos he saw, they would practice.

When John was in his early 20s, he was able to attend a BJJ workshop in England led by John Machado. His first ever time getting to train under a legitimate BJJ black belt.

The workshop changed Kavanagh’s life and he wanted to become a BJJ black belt. A few months after the seminar, John saved some money and was able to fly to the Machado’s school in California. He stayed near the school and trained everyday for a few weeks.

After getting legitimate grappling training, John Kavanagh would have his first pro MMA fight in 2000. Winning his first professional fight by triangle in under a minute.

He would then travel to South Africa to have his 2nd pro fight. John would lose the fight, but would meet american BJJ blackbelt Matt Thornton.

Thornton took a liking to John and would frequently invite him to train at his gym. Straight Blast Gym in Portland Oregon.

John Kavanagh would frequently get invited to train at Straight Blast in Oregon and Thornton would go to Ireland for seminars. Once Kavanaugh retired from fighting, Thornton made him an offer.

He offered John to open an affiliation gym, SBG- Ireland. Soon after opening the affiliate school, Thornton awarded Kavanaugh with his BJJ black belt in 2007.

Becoming the first ever BJJ black belt in the Republic of Ireland. Now that he has his back belt and own school, John was ready to build his gym up.

John Kavanagh has created the most successful gym in Ireland and among the best in Europe. He has a large stable of national and international fighters. The most known are Gunnar Nelson, Johnny Walker, and of course Conor McGregor.

Gunnar Nelson is a pioneer of Icelandic MMA and known for his elite grappling ability. Before becoming a known name in MMA, he made a name for himself in Jiu Jitsu.

In the late 2000s, Gunnar Nelson won 2 Pan championships in GI and No-Gi in 2009. The same year, he competed at the ADCC championship, where he placed 4th in the absolute division. Beating much larger opponents including former ADCC champion Jeff Monson.

After his performances in 2009, Renzo Gracie awarded him with his black belt. Then he set his sights on MMA.

Once he started making a name for himself, he sought out Kavanaugh to train with him. During his MMA career Nelson is 17-5 and 8-5 in the UFC. He credits Kavanaugh for helping him improve his skills.

The latest addition to John Kavanagh’s stable is UFC light heavyweight standout Johnny Walker. A standout fighter that joined SBG after stuffing the first losing streak in his career.

He never really had a solid connection with his fight teams, which led him to John. In his one fight with Kavanaugh, Walker stopped another light heavyweight standout in Ryan Spann. One of the most impressive wins in his career against a top opponent.

By far John Kavanagh’s most known fight is the Notorious Conor McGregor. One of the men behind helping McGregor attain his level of success is John Kavanagh.

McGregor is known for his brash personality that gained him a large following. But he has phenomenal skills that helped him become a 2x UFC champion.

The team of Conor and John has been one of the most effective duos in the history of the sport. Earning an impressive 13-3 record and known for his devastating striking ability. Knocking out many of the best fighters in the world.

His ability mixed with his charisma led Conor to having numerous record breaking PPV buys. The biggest including his fights with Nate Diaz, Khabib, and his boxing match with Floyd Mayweather.

John Kavanagh not only is a highly respected coach, but a pioneer of martial arts in Ireland. In his coaching career, Kavanaugh has coached numerous high caliber fighters that fight in the UFC and Bellator. Including cornering in 3 different world title fights.

His hard work was acknowledged by the MMA community and he won MMA coach of the year in 2017. The year after Conor won the lightweight title and broke the PPV record.

On top of being a top MMA coach, John Kavanagh is also a pioneer of MMA and Jiu Jitsu in Ireland. He is also the first BJJ black belt from Ireland and founded the Irish BJJ Association and MMA Association. Without Kavanagh, MMA and BJJ would not have grown as large as it has become.