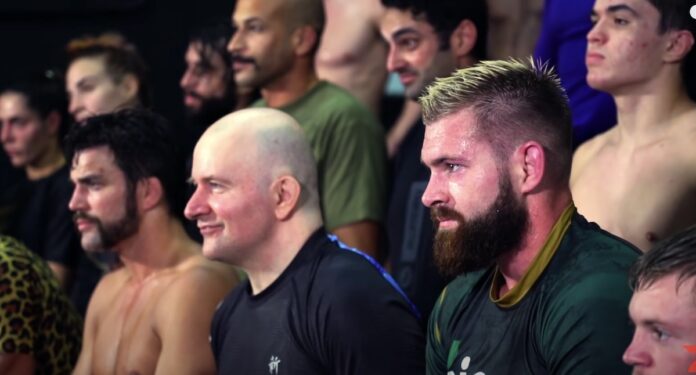 The Danaher Death Squad was an unstoppable force in the world of Jiu Jitsu. They dominated pro No-Gi Jiu Jitsu throughout most of the 2010s and won every major No-Gi title multiple times.

DDS seemed prime to dominate the sport for another decade, but then the team abruptly broke up. Here is the complete story of the Danaher Death Squad.

Detailing their rise dominating sport Jiu Jitsu to breaking up and the members going on to form their own teams.

To detail the full history of the Danaher Death Squad, you have to start with the team’s coach. The mastermind John Danaher.

Danaher is a native of New Zealand that moved to New York in the 1990s to attend grad school. While attending Columbia University studying for his PhD in philosophy, John would work as a bouncer at a nightclub.

One of his co-workers invited him to come train Jiu Jitsu with him at Renzo Gracie’s academy. He was skeptical of Jiu Jitsu at first, but once he began training, Danaher saw it was beneficial to learn.

John would train alongside the likes of Matt Serra and Ricardo Almeida and became one of Renzo’s top students. Since a catastrophic leg injury prevented Danaher from competing, he invested his time becoming the best coach he could be.

His methodical approach would help him become one of the most respected coaches in all of Jiu Jitsu and MMA.

The formation of DDS

Cummings liked Danaher’s approach to Jiu Jitsu and would attend all of his morning classes. John would also begin teaching Eddie his infamous leg lock system that the team would become known for.

A short time after Eddie began learning from Danaher, Garry Tonon would begin taking his classes. He would make the trip to New York with his instructor Tom DeBlass multiple times every month.

Garry would become one of Danaher’s pupils and his game would improve drastically under John. He would win the No-Gi World Championship at brown belt two times before competing at ADCC.

There he would have his epic match with Kron Gracie that many consider the greatest match of all time.

Eddie Cummings and Garry Tonon would compete at the early Eddie Bravo Invitationals. At these events, they would wipe out the competition.

Winning multiple tournaments using Danaher’s patented leg lock system. Even though the two were dominating the pro No-Gi circuit, this would just be the beginning.

Tonon would continually tell people the best was yet to come.

Garry’s statement would be a prophetic one as his teammate and best friend Gordon Ryan would make his EBI debut. Just like his teammates, Ryan would dominate the higher weight classes and win multiple EBI titles.

Danaher’s students had begun their takeover of the sport.

Who came up with the team Danaher Death Squad?

The person that is credited with coming up with the Danaher Death Squad name is their former teammate Ryan Quinn. He posted it on Reddit one day in 2016 describing what it was like to train with them.

The name caught on and everyone within the Jiu Jitsu world would begin calling the group the Danaher Death Squad.

The Danaher Death Squad consisted of some of the best No-Gi grapplers in the world. Here is a list of the most notable members.

Eddie Cummings was one of the original members of the Danaher Death Squad along with Garry Tonon. He would go on to win two EBI tournament titles and one of the early Polaris super fights.

Cummings would have a falling out with the team and leave to coach at another school in New York. To this day, Eddie and the other DDS members are still not on the best of terms.

Garry Tonon was one of the original DDS members and one of the most prominent members of the group. He would win 4 EBI championships, which really made the squad’s presence known in the Jiu Jitsu world.

Tonon has now transitioned to MMA and currently has a 6-1 record and is currently signed with One FC.

“King” Gordon Ryan is considered to be one the great Jiu Jitsu athletes of all time. At just 26 years old, Ryan is one of the most decorated athletes in the history of the sport.

Winning 3 ADCC championships, 2 No-Gi world titles, and 4 EBI tournaments. Gordon will most likely be considered the greatest of all time once he calls it a career.

Gordon’s younger brother Nicky Ryan made waves in the sport as a young prodigy. Beating numerous world champions all before he turned 18. Nicky no longer lives in his brother’s shadow and has carved his own path within Jiu Jitsu.

Nicky Rod took the Jiu Jitsu world by storm in 2019 at that year’s ADCC championship. He had barely been training Jiu Jitsu for a year and took second at the tournament and beat two former champions. As Rodriguez develops his game, many expect great things from this special athlete.

Craig Jones was one of the last big name members of the Danaher Death Squad. After competing against them for a few years, Jones decided to settle in the US and join them. He was already considered one of the best Jiu Jitsu athletes in the world, but elevated his game training with DDS.

Jake Shields, the former Strikeforce champion and UFC vet started training with DDS late into his career. Shields made the transition to compete in pro grappling and chose to train with the Danaher Death Squad. He still competes frequently in pro Jiu Jitsu events throughout the world.

In 2020, the Jiu Jitsu world was shocked to learn that the Danaher Death Squad was leaving Renzo’s school. They decided to part ways and leave the famed blue basement to start their own school.

DDS wanted to make a training hub, where the best athletes from all over the world would come train with them. The place they decided to open their school was on the tropical island of Puerto Rico.

The idea was that putting their gym within a tropical paradise would help attract more athletes to train with them.

The Danaher Death Squad breaks up

After just a few months, the DDS project in Puerto Rico would come to an end. A lot of unfortunate events would lead to the termination of the project.

Everything from the Covid-19 outbreak and the death of Gordon and Nicky’s beloved father Gordon Sr. It was also difficult for people to travel to the island due to Covid, which really hurt the gym.

Gordon Ryan would announce on Instagram that he was moving to Austin to start a new gym. John Danaher would then follow up with a post of his own announcing that the Danaher Death Squad was parting ways.

While they were in Puerto Rico, there were some conflicts between members of the team that were reported. Things such as differences in training philosophies and the failure of the new school caused some friction.

After meeting together, the team decided the best thing for everyone to do was go their own ways. With that, the era of the Danaher Death Squad dominating the Jiu Jitsu world was over.

From the break up, there would be two new teams formed that are ironically enough both in Austin, Texas. John Danaher, Gordon Ryan, and Garry Tonon would go on to form their team New Wave Jiu Jitsu.

Then other members consisting of Nicky Ryan, Ethan Crelenstin, Craig Jones, and Nicky Rod would form the B Team. A name that is a bit of a joke since they were considered the B team of the Danaher Death Squad.

The two schools are actually only a less than 15 minute drive from one another. Although neither team interacts with the other and have no plans on doing anything together.

At this year’s ADCC championship event, both Gordon Ryan and Nick Rodriguez are in the same division. We could very well see a match of two former DDS members take place at the event. We might even see former DDS teammates compete against each other in the absolute division.

The Legacy of the Danaher Death Squad

During their time, the Danaher Death Squad were the most dominant team of their era. Members of DDS won multiple major titles and helped put more eyes on pro grappling. They will forever be known as one of the greatest Jiu Jitsu teams that had ever been assembled.