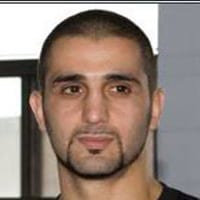 The coach of Tristar first encountered MMA when he was a teen. He got a hold of a VHS of the 2nd Ultimate Fighting Championship event.

Zahabi was enamored with seeing the smaller Royce Gracie control bigger and stronger fighters with grappling. Using perfect technique to get his opponents on the ground and submit them with ease.

After watching, he immediately wanted to train, but unfortunately at the time, there was no BJJ in Quebec. So with no schools available, Zahabi began training with his brother. Using every book and video he could find to learn from and practice.

It wasn’t until a Renzo Gracie purple belt started  teaching at a martial arts school called Tristar. Firas immediately started taking every class he could. He would also take Muay Thai classes at the school to also understand the striking aspect of MMA.

After receiving a blue belt in only 6 months his purple belt coach stepped down as the BJJ coach. The owner of Tristar would make Firas the full time head coach.

Since Firas was only a blue belt, he also needed to learn Jiu Jitsu. So he would begin cross training a few times a month at a local Nova Uniao school ran by Wagnney Fabiano

With the owner of Tristar opening new businesses, he didn’t have time to run the school. So control of the school was turned over to Firas in 2007 and he has been the owner ever since.

Things started moving fast for Zahabi as he would be training students full time. Including MMA fighters with his biggest by far being Georges St Pierre.

GSP moved to Tristar after losing the welterweight title to Matt Serra. He liked Zahabi’s approach to MMA and they would turn out to be a perfect match.

After GSP started training with Firas, they began traveling together to cross train at Renzo Gracie’s Academy. There they would train with some of the world’s best grapplers and primarily under John Danaher.

The relationship between the two schools would blossom and the abilities of the fighters would significantly grow. Especially GSP, who became one of the greatest MMA fighters of all time

After over a decade of hard work, Zahabi was awarded his black belt in Brazilian Jiu Jitsu under John Danaher. Not only working with Danaher, but working with phenomenal grapplers like Roger Gracie, Braulio Estima, and Ricardo Almeida.

After many years of hard work, Zahabi has become one of the world’s best MMA coaches. Under his guidance Zahabi, he has led many fighters to the UFC and world championships in MMA. By far his two biggest being GSP and Rory MacDonald.

Firas Zahabi questions the cause behind Israel Adesanya’s ‘strange’ and ‘very...

Firas Zahabi: Jake Paul Will ‘Definitely’ Be On PEDs For Tyron...

Firas Zahabi: Nate Diaz Beats 99% Of Fighters If You Take...

Firas Zahabi: It Seemed Like Conor McGregor Gave Up Against Dustin...