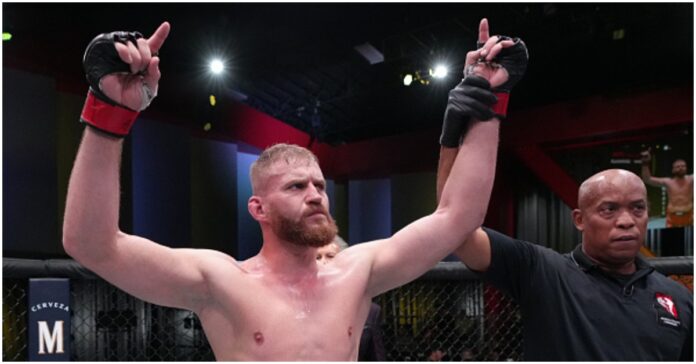 Jan Blachowicz was successful in his UFC return on Saturday, but confirmed that he will undergo eye surgery on Monday following his victory over Aleksandar Rakic.

With a third round TKO win over the Austrian, Blachowicz (29-9-0) likely solidified his position as the next in line for a title opportunity following next month’s UFC 275 bout between reigning champion Glover Teixeira and challenger Jiri Prochazka in Singapore; a fight Blachowicz has every intention to attend, but not before undergoing eye surgery this week.

“It’s OK, but I’m going to have some small surgery on Monday on this eye,” Blachowicz said during the post-fight press conference. “Doctor says maybe it’s going to be small, maybe going to be bigger. He don’t know yet. He need to check in the hospital.”

The injury occurred early in the first round of the main event and was clearly causing trouble for the Polish superstar. Blachowicz recalls the injury happening early in the bout, but was uncertain if it was the result of a punch or an unintentional eye poke.

With his victory over the No.3 ranked contender, Blachowicz will now turn his attention to regaining the light heavyweight championship he lost to Glover Texeira at UFC 267 in October.

“I hope so, that the UFC gives me another title shot, that I’m going to be next one,” Blachowicz said. “I was No 1, Rakic was No 3. For me it’s obvious that I’m the No 1 contender now for the title shot. I’ve never been in Singapore, so why not? I like traveling. I like being in new places. So if they want me I will go there. But first of all I need to fix the eye. I don’t know what they’re going to do.”

Do you think Jan Blachowicz earned an opportunity to reclaim UFC gold with his victory over Aleksandar Rakic?