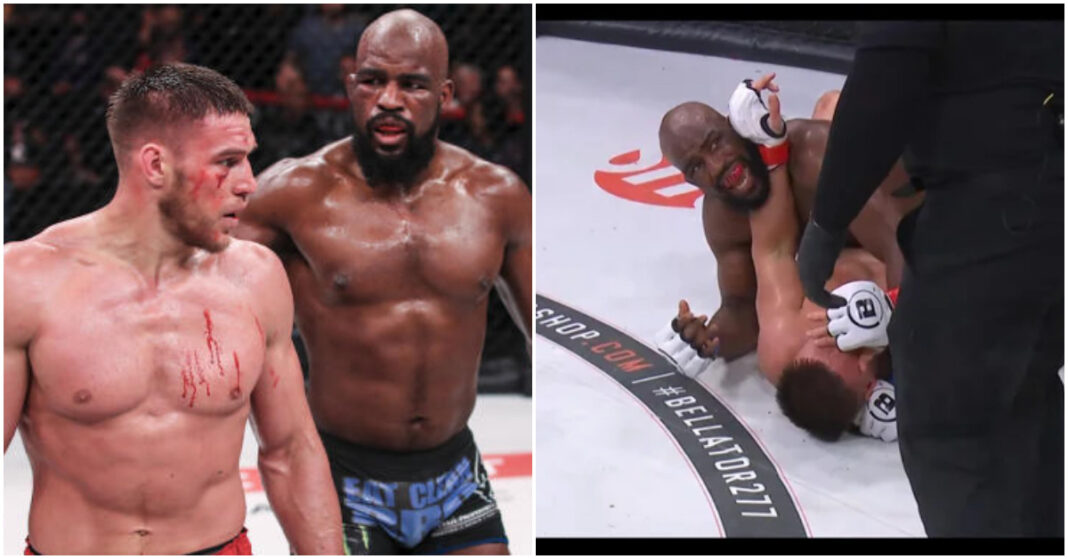 Corey Anderson gives his reaction to losing out on $1 million and a world title at Bellator 277.

Corey Anderson faced off against Vadim Nemkov in the finals of Bellator Light Heavyweight World Grand Prix tournament for a million dollars and the Bellator light heavyweight title strap. Anderson was able to assert his dominance by grappling successfully up until the closing of the third round.

With only a few seconds left on the clock, Anderson accidentally banged heads with Nemkov which left a substantial cut above Nemkov’s left eye. While reports suggest that his coaches and Nemkov wanted the fight to carry on after the incident, Anderson brought the clash of the heads to the referee’s attention which resulted in the fight being called off and ruled a no contest.

Following the fight, ‘Overtime’ expressed his discontentment at the outcome before gathering himself to stay composed as he told Nemkov and his team that it wasn’t anybody’s fault. He then passionately shouted to the crowd, “I’m the f*cking champion.” (h/t BJPenn)

Corey Anderson took to Instagram to inform the fans that he doesn’t regret bringing attention to the clash of the heads.

“Biggest lesson of the night ‘being a good sport and/or person isn’t always the best decision’ but that’s not going to change me from being me. YES! I told the ref ‘we collided heads’ when he and my coaches told me to keep going cuz his eyes were red from the blood.

“It’s always a good time to do what’s right, even if it costs you a million dollars and a world title. And I still don’t think I would’ve handled it any differently.”

Anderson followed up on his reaction with another statement commanding respect for his name.

“You ain’t gotta like me… But put some respect on my name!”

Bellator president Scott Coker has already committed to a title rematch between Anderson and Nemkov likely to happen sometime this year.

Do you think Corey Anderson will win the rematch against Vadim Nemkov?