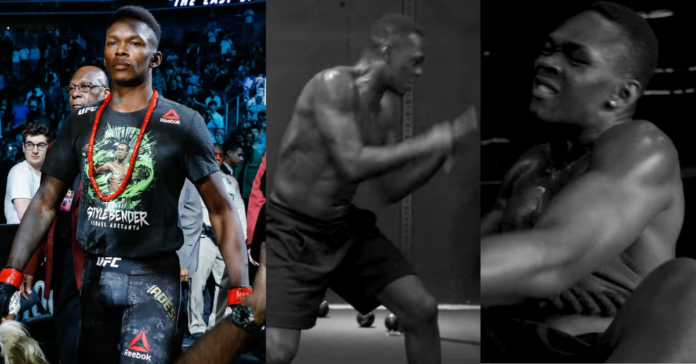 ‘The Last Stylebender’ Israel Adesanya is getting ready for the highly anticipated showdown at UFC 281. The middleweight crown will be on the line when Brazil’s ‘Poatan’ Alex Pereira looks to dethrone the reigning champion. Adesanya will meet his old adversary Pereira in the headlining bout in Madison Square Garden on November 12.

Fans can follow Israel Adesanya’s training journey on his YouTube channel. The Nigerian-Kiwi fighter shares his workouts, eating, and more. See below for the video:

Adesanya and Pereira will have a high-stakes showdown at UFC 281. However, this is not the first time the two have met. When both were active kickboxers, they met in two bouts. The Brazilian ‘Poatan’ walked away with two victories against ‘The Last Stylebender.’ Now, Pereira is looking for a third win while Adesanya seeks to avenge these losses.

READ MORE:  Jon Anik explains that Dana White may fire him at any time: "He won’t hesitate to get rid of me."

In an interview with Sportscenter, Adesanya explained the stakes:

“[The first two fights] are part of history, part of his story, because the judges gave him the nod in the first one, and the next one, he took me out in the third round. So that’s part of his story. But now it’s time for my story.” [Transcript courtesy of MMA Fighting]

Adesanya added that he thinks he can exact revenge for these losses, he continued:

“For me, [the difference between then and now] is the gloves. When I said something about the pillow gloves, you can’t hide behind the [big gloves], you can’t guard the same way in kickboxing [as you can] in MMA. You have to be able to use your brain, move out the shot. And also my striking style is a lot different in MMA than kickboxing. That’s why I’ve had so much success as a ‘kickboxer’ in MMA, because I don’t strike like them … I already leveled up. I already leveled up a lot, so I really, really, really look forward to this fight.”

Alex Pereira was a two-division champion in GLORY Kickboxing before switching to MMA. See below for the full interview with Israel Adesanya: