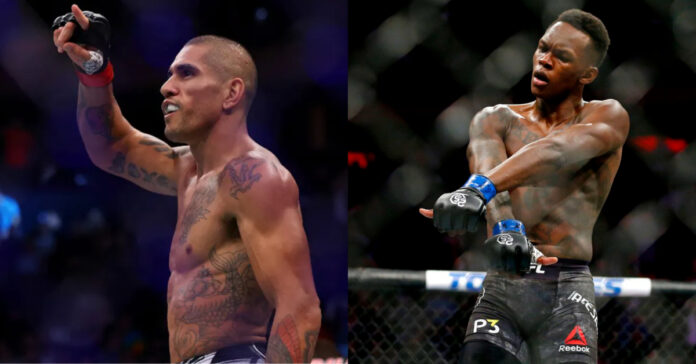 In what will be the third meeting of Alex Pereira and Israel Adesanya in a combat setting, the Brazilian recalled the moment his son entered the ring mimicking Adesanya after he was on the receiving end of a devastating knockout.

Pereira has bested Adesanya twice in both meetings in the first instance beating the current middleweight champion via decision before unleashing a furious head kick which stopped ‘The Last Stylebender dead in his tracks the second time around. This was the only time in Adesanya’s professional career that he had been defeated by knockout also.

Now looking ahead to the third meeting of these two men taking place in the main event of UFC 281 where middleweight gold will be up for grabs, Pereira went onto social media to highlight the moment his son Alessandro entered the kickboxing ring to mimic the impact left upon Adesanya by his father.

“I told them before not to let him in the ring (laughing emoji) (my son Alessandro after I knocked Adesanya out)” Pereira said on his social media.

In what appears to be Adesanya’s toughest test to date not only physically but mentally the champion will be looking to exact revenge on Alex Pereira and continue his dominance in the middleweight division. Undefeated in the 185-pound weight class the current champion’s only loss inside an MMA cage came when he dared to be great and challenged then light-heavyweight champion Jan Blachowicz for his title.

‘Polish Power’ was able to get the better of Adesanya using a well-structured approach with his striking and grounding Adesanya to the matt using the physical advantages he held at UFC at UFC 259.

Since Alex Pereira’s introduction into the UFC, Adesanya has successfully defended his title on another two occasions. Firstly, he was able to best ‘The Reaper’ Robert Whittaker at UFC 271 in their rematch beating the Australian via decision. He would then go on to defend his title at UFC 276 where he shared the card with his next opponent. Adesanya was able to emerge victorious over Jared Cannonier whilst Pereira blasted his way into title contention with a violent knockout of Sean Strickland on the same night.

Before this Pereira introduced himself to the UFC fanbase with a TKO victory over Andreas Michailidis and UFC 268 before releasing a relentless bombardment on Bruno Silva at UFC Fight Night: Santos vs. Ankalaev which saw him beat his fellow Brazilian via unanimous decision.

UFC 281 will be redemption territory for the current middleweight champion as his opponent will look to emerge 3-0 against the city-kickboxing title holder.

Will Israel Adesanya obtain the revenge he desires or will be looking at the new middleweight champion, Alex Pereira, at the end of the matchup?