LowKickMMA.com
Home UFC News Who Gets The Next Heavyweight Shot After UFC 180? 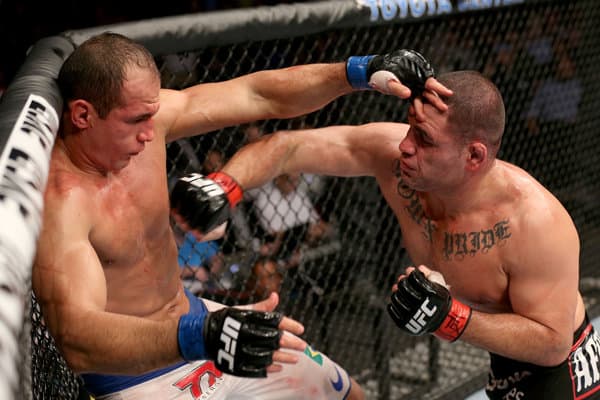 The revival of the UFC heavyweight division has been a long-time coming, and come November 15th we will finally see the champion return to action. The dominant Cain Velasquez has been sidelined since smashing Junior Dos Santos at UFC 166, sealing the duos trilogy of fights with a slam & punches TKO win.

With the year-long absence of Velasquez, we’ve seen the division move very little. “”Super Samoan” Mark Hunt actually has got himself back up the rankings again, and fringe contenders Andrei Arlovski & Josh Barnett are likely the only changes since last October. So who will be the next contender in the complicated title picture? The answer lies within the UFC 180 main event.

If Velasquez holds on to his title, the potential match-ups could ease the traffic at 265 pounds; Travis Browne is number three in the division, and a win against Brendan Schaub at UFC 181 could set him up nicely for a title match against Velasquez, or Werdum. “Vai Cavalo” snapped a three fight/knockout spree for “Hapa”this past April, and an impressive finish over Schaub could be key to the Hawaiian fighter’s title aspirations.

#5 ranked Croatian Stipe Miocic is on a two-fight spree right now, although his last outing was a fight against light-heavyweight Fabio Maldonado, and probably gets him little props at hw. SO he’ll need to impress in his rumoured UFC on FOX 13 date with Junior Dos Santos. Looking at the top 15, the division still lacks a plethora of contenders, although there are still interesting fights to make after UFC 180….

Of course everything depends on circumstance; you never know what fresh blood will burst on to the scene, and equally what injuries or misfortunes may befall the talent at heavyweight. Alistair Overeem, Stefan Struve, Big Nog, Frank Mir, Roy Nelson, Gabriel Gonzaga, Bigfoot Silva and Josh Barnett are all coming off losses right now, that’s over half of the division. That limits the amount of top level fights to make, especially when considering title implications.

One fight I’d personally like to see is Andrei Arlovski vs Mark Hunt. The current number 7 & 4 respectively are talented and popular fighters, although Hunt may be aiming up as opposed to down the rankings list. So UFC 180 will give us a few answers, but there really needs to be some matchmaking done for the promotions top heavyweights, and what about JDS?

“Cigano” lost in absolutely horrific fashion against Velasquez, and you have to wonder about the legitimacy of a fourth fight between the two within the next 12 months. So which fights do you want to see, and who do you think is the next contender after UFC 180?