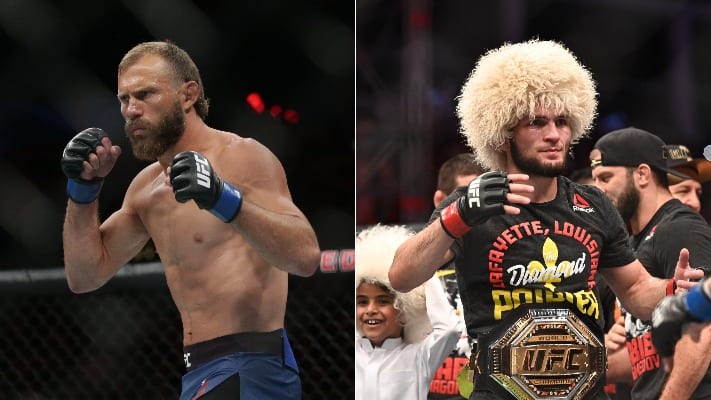 Donald Cerrone knows the stakes are high for his UFC Vancouver main event against Justin Gaethje.

Should he win the fight on Saturday, “Cowboy” believes there is only one fight that makes sense after. That is to fight Khabib Nurmagomedov, and fight for the belt next time out.

“After I beat Gaethje, there’s nobody else (except Nurmagomedov),” Cerrone said after open workouts (via MMA Junkie). “That’s it, there is no one in front of me. I do want to fight in December though. I’ll have to take a little 155 break go to 170, we’ll see.”

Against Gaethje, this fight promises to be fireworks. Gaethje assures it will end with someone being knocked out. Yet, ahead of the scrap, Gaethje revealed when he and Cerrone trained with each other, “Cowboy” knocked him out.

For Cerrone, he was surprised Gaethje said that, but says that was back then, and this will still be the fight everyone thinks it will be.

“I would have never brought that up on my end, you know?” Cerrone said. “So I don’t know why he did. But training is totally different than fighting, and it must have been a weird, lucky shot. That was so many years and he’s a totally different guy and its gonna be the fight everyone thinks it’s going to be.”

In the end, if he beats Gaethje, Cerrone is hoping he can fight for the lightweight title next. But, if that doesn’t happen, he could always fight for the new BMF title. Of course, he named his ranch the BMF Ranch. But, for “Cowboy” he isn’t sure that fighting the winner makes sense.

“There we go,” Cerrone said with a chuckle. “Both of them whooped my ass already so that would be kind of hard.”

Do you think with a win over Justin Gaethje, Donald Cerrone deserves a title shot?