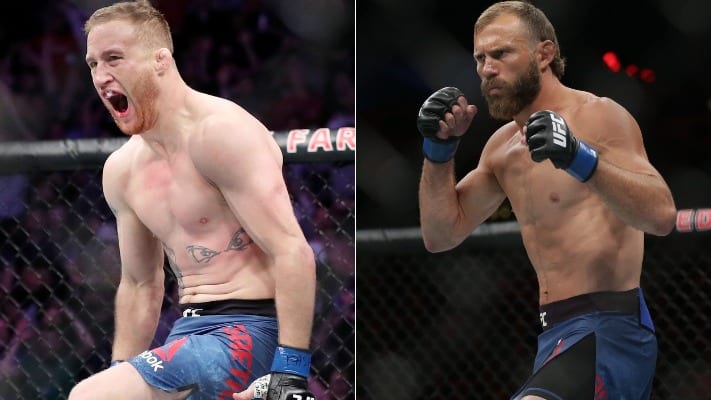 A fight of the year candidate is quickly approaching. Knockout artists and fan-favorites Justin Gaethje and Donald “Cowboy” Cerrone will clash in the UFC Vancouver main event on September 14.

The action gets underway from the Rogers Arena in Vancouver, British Columbia, Canada. Speaking to MMA Junkie recently, Gaethje explained why his matchup with Cerrone is one that doesn’t need to be hyped up through talk. Everyone knows to expect “pure violence” when these two clash.

“This is pure violence,” Gaethje said. “This does not need to be talked up. Cowboy has had the most fights, the most performance bonuses, this will make it the most fights ever, the most wins I think, something like that.

Gaethje is currently on a two-fight winning streak after vicious knockouts of both James Vick and Edson Barboza. The former World Series Of Fighting (WSOF) lightweight kingpin takes on Cerrone, who comes off a TKO defeat to Tony Ferguson after his eye swelled up due to “Cowboy” blowing his nose during the fight. The contest was called off via doctor stoppage.

The pair have a history with one another, as Cerrone actually once knocked Gaethje out during sparring. However, the occurrence was so early into Gaethje’s fighting career, and “The Highlight” has evolved leaps and bounds since then. He looks forward to giving Cerrone a receipt.

“He knocked me out … he dropped me in sparring,” Gaethje said. “I don’t even know if I had a pro fight at the time. I was a kid then and a man now and I’m excited to get in there and give him back that one, yeah.”

What do you think about Gaethje dubbing his fight with Cerrone “pure violence?”