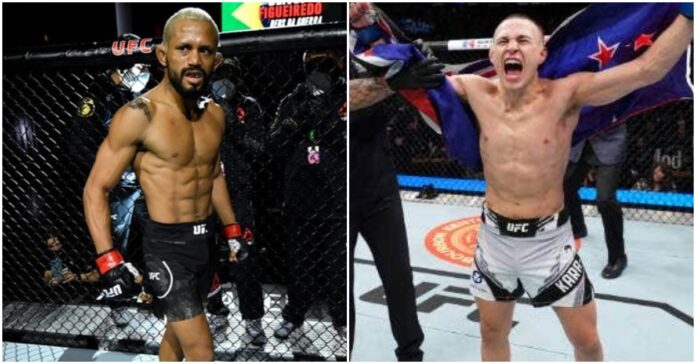 The current UFC flyweight champion, Deiveson Figueiredo, congratulated Kai Kara France following his big win over Askar Askarov at UFC Columbus and expressed his desire to face the man from New Zealand next.

Kara-France survived some scary moments to pick up a unanimous decision victory over the #2 ranked Askarov and stretch his current runs of consecutive wins to three having previously knocked out Cody Garbrandt and Rogerio Bontorin in back-to-back fights.

During his post-fight interview with Daniel Cormier, Kara-France called for a shot at the winner of Deiveson Figueiredo vs. Brandon Moreno 4, which is expected to take place this summer.

“Now I’m starting to put it (skills) all together,” Kara-France said. “So, hey I know Brandon Moreno and Deiveson Figueiredo are fighting very soon, but I want the next title shot!”

The Brazilian knockout artist has since taken to social media to congratulate Kara-France who he feels should be next in line for a shot at 125lb gold before Moreno.

“Congratulations you dirty kiwi @kaikarafrance you just punched your ticket with the God of War. @theassassinbaby you just took the back seat. You are 0- 2 against @Pantojamma if you could beat him I’ll give you the next title shot. Vs let’s make it happen @danawhite,” Figueiredo wrote on Twitter.

Moreno first lost against long-time contender Alexandre Pantoja during their time in The Ultimate Fighter house in 2016. Two years after tapping ‘The Baby Assasian’ with a rear-naked choke, Pantoja picked up a dominant decision win over the man who has since gone on to become the first Mexican UFC champion.

Pantoja was supposed to fight Moreno for a third time at UFC 270 but a knee injury forced him out of the bout and Figueiredo made good on his replacement opponent spot.

All signs point to Figueiredo vs. Moreno 4 taking place at UFC 276 on July 2, however, nothing is signed yet and the door is open for Kara-France.

Who do you want to see Deiveson Figueiredo fight next?