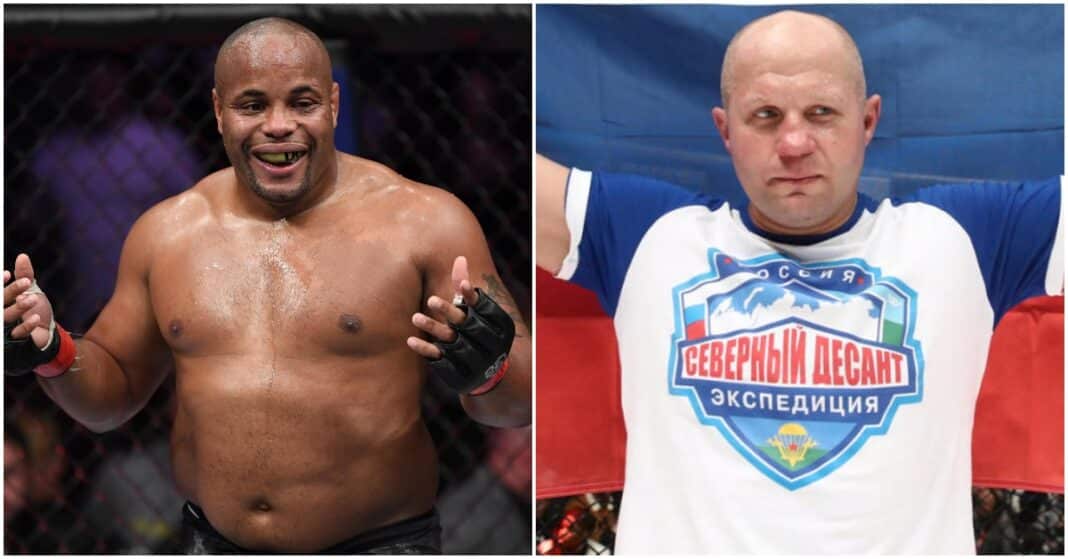 Daniel Cormier has clarified the recent comments he made about Fedor Emelianenko on the Debate DC show.

The former dual-weight UFC champion suggested Emelianenko would’ve struggled in MMA’s premier promotion if he signed for them in 2009.

Some fans have called Cormier out for his comments and suggested he disrespected one of the sport’s biggest legends who rolled back the year with a sensational KO win at Bellator 269 this past weekend.

On Monday, Cormier attempted to clarify his comments in a video uploaded to his personal YouTube channel.

“I don’t understand how this ruffled so many people’s feathers. Because it was proven, in that timeframe, that he wasn’t as effective. It’s that simple. I love Fedor. I watch today if he fights, and I root for him every single time. the guy is a wonder of the world. He’s a guy that doesn’t come around very often.”

Cormier says Emelianenko is the best heavyweight of all time and the losses he has suffered in the latter stages of his fight career do not take away from his legacy in the sport.

“With all that being said, I still believe Fedor Emelianenko is the greatest heavyweight of all time,” Cormier said. “I love Stipe. Stipe is the best UFC heavyweight of all time, but the wins Fedor had in Pride, over the likes of Nogueira and all those guys, Arlovski, hats off to you, bud. I don’t mind that. I like Fedor. The fact that he’s still fighting at 45 and knocking dudes out like he did Tim Johnson, hats off to the GOAT. I have no issues with the man. I’m talking about a specific window in which I don’t believe that he would be as effective as he was in the years earlier….

“Does that mean everything he did in the past is not as valuable? Hell no. I actually hate the way people are judged, because when Anderson Silva was the man, everybody called him the GOAT, but when he turns 41, 42 and he’s losing fights, now all of a sudden Anderson’s not the GOAT? We’re gonna judge him based on his late career and just devalue all the things he did when he was in his prime? That’s not how it works. We can’t devalue Fedor Emelianenko because of what we saw before.”

“Now, what he’s got going on now, that’s inspiring,” Cormier said. “To be 45 years old and knocking out Tim Johnson the way that he did. That is inspiring and that’s why Fedor Emelianenko is the man…. I look up to him. I really tried to learn from his approach and how he went at people. Being a smaller guy and beating people the way that he did. So this is just to clear the air. I don’t hate Fedor. I think he’s the best. I just think that in a small window when it was really coming to pass, he wouldn’t have been the best. But hats off to the man. Congratulations on the victory and I’m excited to see him fight again.” (Transcribed by MMA Fighting)

Do you agree with Daniel Cormier? Is Fedor Emelianenko the best heavyweight of all time?