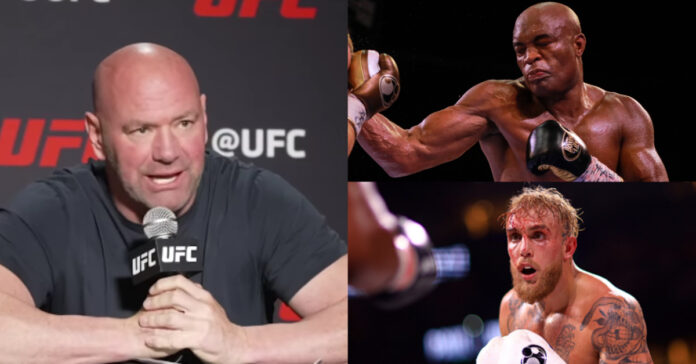 UFC President Dana White reacted to the headlines that a boxing match between YouTuber turned professional boxer, Jake Paul and former UFC middleweight champion Anderson Silva is in the works.

Over the past few days, news appeared to break that ‘The Problem Child’ would face the biggest test of his combat sports career against arguably the greatest fighter to ever step inside the Octagon. Rumored to go down on October 29th, 47-year-old Anderson Silva is rumored to step into the squared circle for his fourth career boxing match. ‘The Spider’ previously defeated Julio Cesar Chavez Jr. and Tito Ortiz in 2021. Most recently, Silva competed against Bruno Azeredo in an exhibition bout.

When asked about the rumored match-up, Dana White once again let it be known how he feels about Paul but acknowledged that the fight will be his toughest test yet.

As another member of the media attempted to bring up Jake Paul again. Dana White was having none of it.

For nearly seven years, Anderson Silva reigned supreme as the UFC’s middleweight world champion. With 10 title defenses, ‘The Spider’ could have his own chapter in the UFC record books. However, in the latter part of his career, ‘The Spider’ admitted to feeling disrespected by Dana White and the promotion in an interview with SportsNaut.

“When I was done in UFC, everybody — especially Dana White — said, ‘Oh, Anderson can’t fight anymore. Nobody in the same age [group] with Anderson can fight, it’s terrible,’ and blah, blah, blah. And talking a lot of sh*t about me,” Silva told. “And I feel disrespected because it doesn’t matter what happened — fight is fight. You can win, you can lose.

“They try to use you and kick you out. And when you’re out, they try to destroy your career [so] you don’t fight anywhere. This happened [to] a lot of fighters. People don’t think about that. I had a good time in UFC, and bad times too. The bad time for me is the experience I have behind the scenes. But inside the cage, inside the fight, I do my best. It’s the only time I have control. Outside I don’t have control.”

Confused by the comments from Silva, Dana White responded by saying that he treated ‘The Spider’ with nothing, but respect and even encouraged a bout between Silva and Jake Paul.

“Anderson Silva, what the f*** is Anderson Silva talking about?” White said at the UFC 274 post-fight press conference. “When have any of you ever heard me talk negative, except for the fight in Abu Dhabi, about Anderson Silva? Never. I’ve never talked bad about Anderson Silva. Not only that, we let the guy fight through his contract, he lost seven of his last eight, or eight of his last nine fight, and always treated him with — I don’t know where the hell this is coming from, from him that then I started trying to make is so he couldn’t make money after. I said, ‘Jake Paul is looking to fight somebody, fight Anderson Silva, that guy’s out there, he’s available, he’s 47 years old.’ It’s baffling to me.”