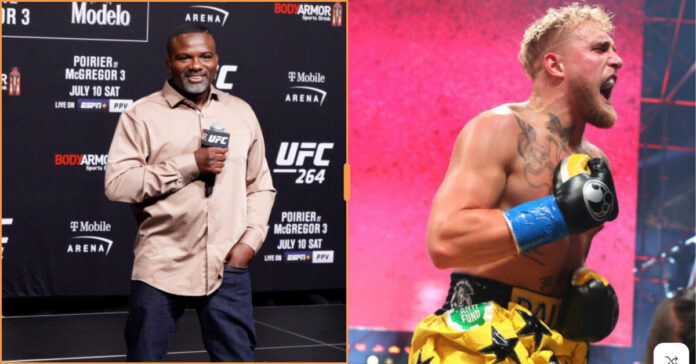 Din Thomas has questioned the real intentions of Jake Paul after the undefeated boxer made jokes at the expense of Kamaru Usman and Luke Rockhold following the pair’s respective matchups at UFC 278.

As someone who proactively promotes issues such as fighter pay and shows concern for the welfare of the athletes, it appears as if Paul has now come full circle to disregard the two men after they competed last weekend in the co-main and main event of UFC 278.

‘The Problem Child’ took to social media to disrespect Usman with a series of tweets he posted online after Usman was knocked out by Leon Edwards stunning head kick late in the fifth round.  Then prior to this he had taken aim at both Rockhold and his opponent Paulo Costa claiming the pair put on an embarrassing display for the sport despite many fans applauding Rockhold for the determination he showed in his final octagon outing.

Din Thomas says Jake Paul is ‘not standing up for fighters’

Speaking to MMA Fighting, Din Thomas like many was confused by the comments Paul had made, especially given the awareness he has previously brought upon trying to improve these same competitors’ wellbeing.

“It’s very contradictory, right? Whose side are you actually on? He’s in a position where he might be the most popular fighter around. He and Conor might be the most popular fighters, and he’s done a lot for combat sports. You can’t take that away from him. He’s done a lot for combat sports — for women, for men, boxing, all of that — he’s brought a lot of attention to combat sports, and to the fighters, but a lot of times, it’s for the wrong reasons.”

“When you go on there and you rip a guy like Usman, and then you’re ripping legends like Luke Rockhold, dude, what are you doing?”

Given his platform Din Thomas believes Paul truly could benefit athletes competing within the sport, however, he should be advocating for those dreaming of making it into the top promotions such as the UFC.

“That’s who Jake Paul needs to help, not the UFC guys. Don’t go to the UFC guys and say they need help. UFC I see guys at the [Performance Institute] getting free food, free medical care, free resources, they get taken care of.”

A vast majority of the followers within the sport questioned Jake Paul’s real intentions on whether he was highlighting such as issue for his own personal gain, now it would be fair to say you can add Din Thomas to that list too.

Do you agree with Din Thomas’ comments?