LowKickMMA.com
Home UFC News Tito Ortiz Wants To Give Chael Sonnen ‘Another Chance’ To Come Back... 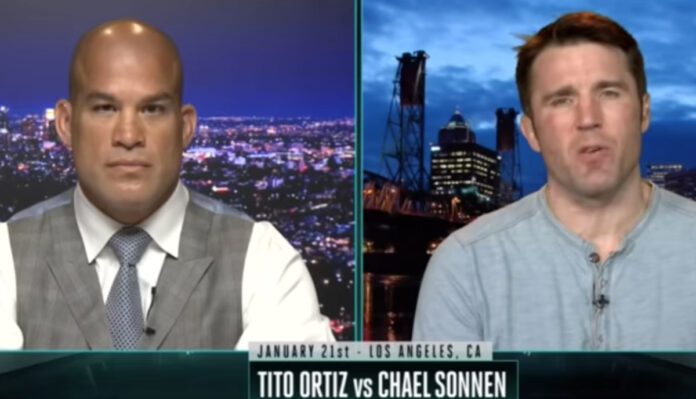 Tito Ortiz has recently claimed he is open to giving Chael Sonnen “another chance” after a much controversial ending back in 2017.

During the pair’s meeting back at Bellator 170, Ortiz was able to ‘survive’ Sonnen’s early onslaught, before managing to get his hooks in to earn himself a first-round submission victory.

Although the bout was concluded quickly, there has been much long-lasting stigma between the pair and their fans regarding who really won that fight.

‘The American Gangster’ was able to jump onto an early guillotine choke, before letting go of his grip, believing that the 47-year-old had tapped out. However, Sonnen was quick to realize that the fight had not been stopped, for only a few moments to pass before finding himself tapping out to Ortiz.

The former UFC Light-Heavyweight Champion took to his social media, where he has attempted to lure Sonnen out of retirement and back into the cage, after posting a video of their encounter in 2017, whilst captioning the post:

“(Chael Sonnen) never kept his promise. I will give you another chance!”

The promise that Ortiz refers to was Chael Sonnen’s promise he made to his late father before his fight in 2017, where he promised his dad that he would beat Tito Ortiz.

Sonnen has openly exclaimed to the media and his fans about the frustrations he has endured after failing to make good on his promise. The 45-year-old got emotional during a promotional video ahead of his Bellator debut against Ortiz.

Despite Sonnen not being able to beat Ortiz and come good on his late father’s promise, the pair still haven’t moved on from their rivalry even into their late forties.

Tito Ortiz admits that he has burned through his savings faster than he anticipated. So, if anything the window seems to be always open for that opportunity. It may just be a matter of if it’s too little too late to see both UFC legends go at it for a second time.

Who would win the rematch Chael Sonnen or Tito Ortiz?