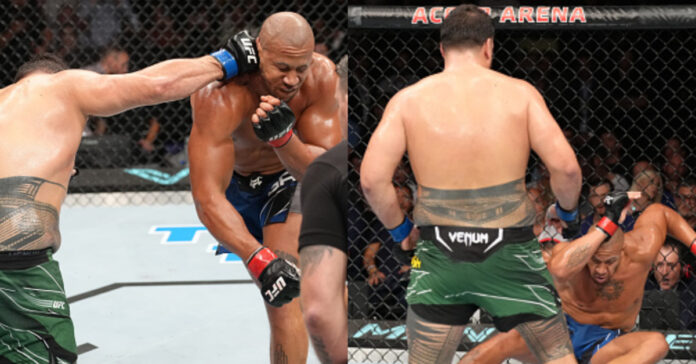 Ciryl Gane has faced a lot of hard hitters in his UFC career, but the Frenchman says that none have been as powerful as Tai Tuivasa.

Gane and Tuivasa met in the UFC Paris main event on September 3rd. ‘Bon Gamin’ scored a third-round knockout to earn his eighth victory inside the Octagon, but it did not come without some adversity. In the second round, ‘Bam Bam’ landed a massive right hand that dropped Gane. Tuivasa appeared to be moments away from what would have been the biggest win of his MMA career. However, Gane was able to weather the storm and recover. While speaking to Ariel Helwani, Gane admitted to being in some real trouble when Tuivasa’s right hand landed clean on his chin.

“The feeling was just, because I didn’t see anything, talking about his punch, that’s why I fell down, and I think the ground woke me up,” Gane told Ariel Helwani on The MMA Hour. “When my ass touched the ground I said, ‘Oh, what happening?’ And I understood and reacted directly, that he caught me so I go ahead on his legs to grab and stand up, and after that, I took a rest — maybe three, four seconds — and moved away and it was OK, but he touched me for real.

“He’s really dangerous. You see sometimes you have some guys, you can’t explain, but he has something in his hands, just like that. When the guy touches you, you go down. That’s it. Incredible.”

Ciryl Gane has faced some of the heaviest hitters in the UFC. Francis Ngannou, Derek Lewis, and Jairzinho Rozenstruik just to name a few, but ‘Bon Gamin’ believes that none of them carry the same kind of power as Tai Tuivasa.

“No [I’ve never felt power like that before],” Gane said. “When you look at the punch, it really doesn’t look hard, powerful. But when he touches you, he touches you for real. That’s why I say, I don’t know exactly. I can’t explain, but he has something in his hands and this is the first time I’ve felt this.”

After nearly suffering his first career stoppage at UFC Paris, Ciryl Gane walked to his corner at the end of the second round knowing that he needed to take things to another level. Typically celebrated for his technical striking displays, Gane implemented a more aggressive style in the third round which led to a beautifully placed right hand that wobbled Tuivasa, setting up a spectacular finish for the No. 1 ranked heavyweight contender.

“I was always in, even this experience when I go down, I was in, I was focused,” Gane said. “And the last round, it was, ‘OK man, you run on me, so I’ve got not choice but to do the real war now.’ Normally I like to do the ‘Bon Gamin’ style, move away, but at this moment, it was not possible, so that’s why I faked to go away and I went in with the knee, boom, attacked him. I give him the middle knee, uppercut…it was a great fight. It was cool.”

Ciryl Gane is a former UFC interim heavyweight world champion. He has defeated some of the biggest heavyweight names in the game, but his victory over ‘Bam Bam’ in front of a hyped-up hometown crowd was by far his favorite win.

“100 percent, the feeling was really different,” Gane said when asked if this was the biggest win of his career. “At the beginning of the fight it was ‘Ciryl! Ciryl! Ciryl!’ The feeling was really crazy. This was making me really happy. I don’t know if I can explain exactly the feeling, but when I finish the fight, my reaction was just I want to see everyone scream. Everyone was really happy, so I just walked [around] the cage, maybe two or three [times], just looking at the fans like, ‘Wow, you are really crazy.’ So it was a big moment.”

What comes next for Ciryl Gane is anyone’s guess. A fight against No. 3 ranked heavyweight Curtis Blaydes would make a lot of sense and would also deliver fans a fresh match-up in the heavyweight top five. There is the possibility that Ciryl Gane could face one of three heavyweights scheduled to return in late 2022/early 2023 including Jon Jones, Stipe Miocic, and the UFC heavyweight champion, Francis Ngannou.

Who would you like to see Ciryl Gane face in his next UFC appearance?