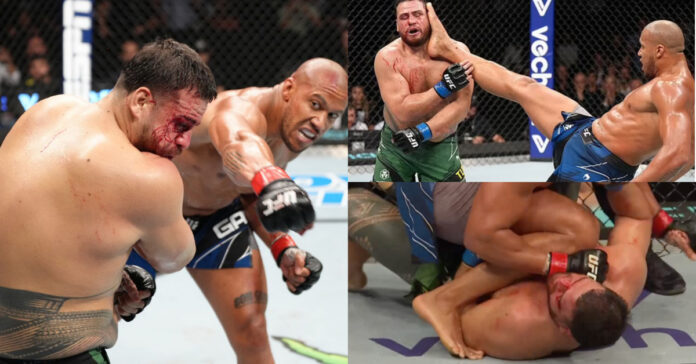 This past Saturday, the rising Australian prospect faced his toughest challenge in former UFC interim heavyweight champion, Gane, who was competing in his homeland in the promotion’s first event in France at Accor Arena. Stakes were high going into the matchup as each man looked to solidify his place in the mix of title contention.

The headlining bout between Gane and Tuivasa delivered on every mark. Tuivasa became the first fighter to score an impressive knockdown on Gane, who has only lost to the reigning heavyweight king Francis Ngannou. Gane did well to recover and fired right back with some massive kicks to the body that clearly hurt Tuivasa, who crumbled in pain but refused to give up.

As the exciting slugfest carried on, Gane adopted his regular more technical approach. He exhibited his touch and move style, peppering in the piercing jab on Tuivasa. The body shots started to slow down Tuivasa, and although he displayed his extreme toughness, a huge shot from Gane in the third round would mark the beginning of the end for “Bam Bam.”

Gane called out for a second title shot following the incredible win in his post-fight octagon interview. He heaped praises on the crowd in attendance in Paris, suggesting more UFC events, possibly including a title rematch with Ngannou, to be held in the country.

It’s unclear if the win would be enough for Gane to get another chance for the gold. He could be looking at a showdown with other top-ranked contenders, such as Curtis Blaydes, next.

You can watch the highlights from UFC Paris: “Bam Bam” Tuivasa vs. Gane main event below.

Gane knocked out Tuivasa with a flurry of follow-up punches in round 3 (4:23).