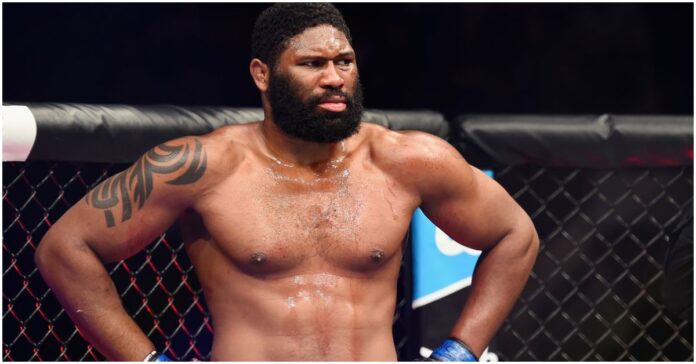 Curtis Blaydes is looking forward to facing the winner of Ciryl Gane and Tai Tuivasa, after his win over Tom Aspinall at UFC: London.

The fight didn’t go exactly how Blaydes envisioned the bout going, as he won via TKO/injury in 15 seconds. Aspinall’s knee blew out as he went to take a step back, after landing a leg kick on Blaydes. It was another unfortunate end to a card, just one week after the Yair Rodriguez vs Brian Ortega fight.

Blaydes claimed that he wan’t even going to go to his wrestling, and wanted to stand and throw hands with Aspinall. He was asked in his post-fight interview if that was the plan.

“Yeah, everyone was hyping up his speed. He’s not as fast as you guys think he seems to be. I know it was only 15 seconds, but every exchange he got touched. A lot of his highlights when he’s sparking these guys, they’re stagnant… I don’t believe the hype, I just don’t think he’s that fast.” Blaydes said.

Curtis Blaydes will only fight the winner of Gane vs Tuivasa, and won’t fight down the rankings

“Heading into this fight I envisioned the winner, who is me, facing the winner of Gane and Tuivasa. I’m not ‘gonna pass up an opportunity to fight those guys.” Blaydes said

He continued on to another question, asking whether he would rather fight again instead of waiting for Gane and Tuivasa.

“No, why would I do that? That doesn’t help me with the rankings at all. Staying active? You don’t have to stay active. You have to beat highly ranked opponents. So I’m going to wait for the winner, I will not be taking numbers 6-8. It doesn’t help me, it helps them. I’m not looking to give any handouts.”

Blaydes was firm that he would like to fight the winner of Gane and Tuivasa. A win over one of them, would insure him a title fight as well.