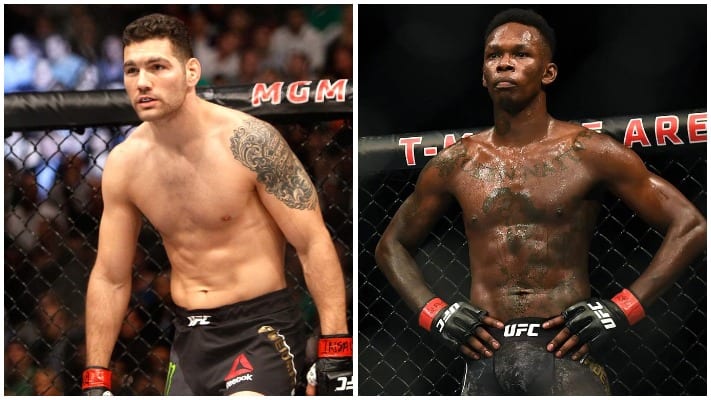 The former UFC middleweight champion, Chris Weidman has continued his public pursuit of current 185lb king Israel Adesanya. Earlier this week Weidman made his case for a shot at ‘Stylebender’ who is fresh of an impressive defence of his title at UFC 253.

‘The All American’ is flying high himself after picking up a decision win over Omari Akhmedov at UFC Vegas 6 back in August. It was Weidman’s second win in seven fights but enough in his opinion to earn a shot at the champ who he believes he’d “rag doll” in a potential match-up.

Weidman took to social media last night to draw comparisons to how he and Adesanya both faired against middleweight GOAT Anderson Silva and long-time contender Kelvin Gastelum, he wrote.

“Hey, I just realized I have 2 common opponents with Adesanya…Gastelum who I finished. Then Silva who I finished twice. Israel Adesanya squeaked by decisions on both of those guys.. Adesanya is just another Silva without the black belt in Jitsu. Easy Money.”

‘Stylebender’ fired back at the former champ saying Weidman needs a few more wins before he can be considered a contender once gain.

“Chris Weidman… get some wins first please,” Adesanya wrote. “I already have you figured out. I’ve sized you up a few times. Watched you hit and miss I know how to fuck up your single and double leg attacks I’m 10 steps ahead like I said. I knew I would use this clip one day to prove that I knew!”

Weidman continued to go at Adesanya who he is confident of crushing when they fight.

“You were very nice to my face that night to be talking like that on your phone. Two faced as hell! I would grab your weak ass and crush you! YOU remember our interactions that night and YOU know this is a problem you don’t want,” Weidman concluded.

Do you want to see Chris Weidman vs. Israel Adesanya?