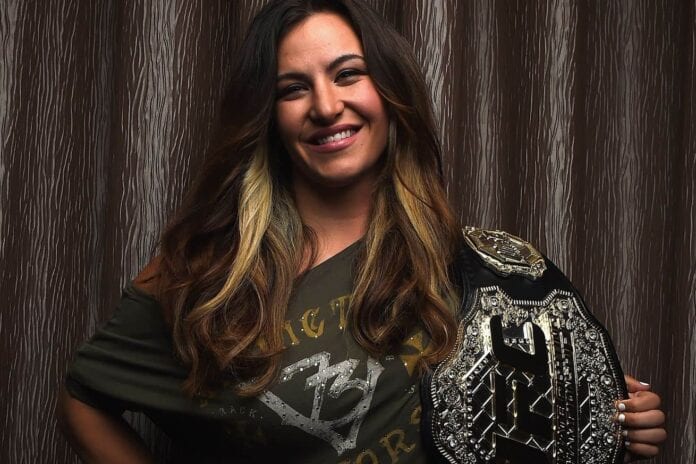 Newly crowned UFC women’s bantamweight champion Miesha “Cupcake” Tate recently signed a new contract with the promotion, and it seems as if she has her first title defense set as well.

The reigning queen appeared on tonight’s (April 6, 2016) edition of UFC tonight to announce that she would be putting her strap on the line against No. 4-ranked surging contender Amanda “The Lioness” Nunes at July 9’s blockbuster UFC 200 from the brand new T-Mobile Arena in Las Vegas, Nevada.

Since dropping a second loss to previous dominant champion Ronda Rousey back in 2013, Tate has run a demolition course through the division.

The former Strikeforce title holder has picked up five straight victories, capped off by an emphatic fifth round submission win over former champion Holly Holm last month (March 5, 2016) at UFC 196 to secure the title.

Nunes, on the other hand, is riding a three fight win streak, including two finishes. After scoring back to back stoppages over the likes of Shayna Baszler and Sara McMann, “The Lioness” picked up a decision victory over Valentina Schevchenko also at March 5’s UFC 196.

This bout may come as a surprise to many, as lucrative bouts between Tate and Holm, and Tate and Rousey loom over the horizon, but Nunes remains an interesting challenge nonetheless.

UFC 200 is set to be headlined by a highly anticipated rematch between Nate Diaz and reigning featherweight champion the “Notorious” Conor McGregor.

Is the upcoming mega event shaping up as you thought it would?