LowKickMMA.com
Home UFC News Breaking Down The Next Three UFC Title Fights For AKA 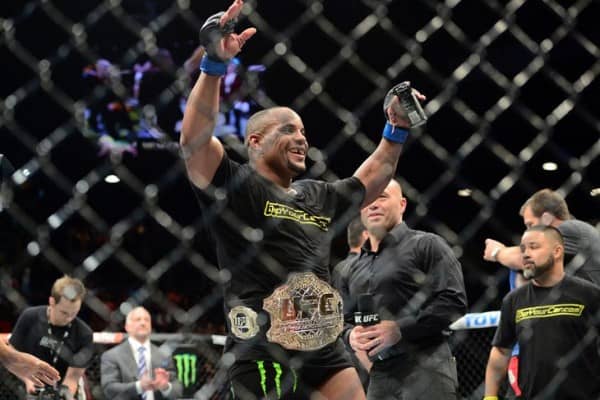 The American Kickboxing Academy is one of the countries most renowned gyms, and has housed some of the sport’s biggest names during it’s some-30-year history. Some legends and well known faces associated with AKA include BJ Penn, Josh Koscheck, Jon Fitch, Andrei Arlovski, Anthony Johnson and Frank Shamrock, but to name a few. Perhaps never more so than today, the San Jose, California based gym founded by Javier Mendez has always been a powerhouse of talent, and 2015 could well be the best year ever if things go to plan.

Cain Velasquez really brought the focus of the MMA world on to the wrestler-heavy gym back in 2010 with his dominant title win over Brock Lesnar at UFC 121. Since then, the legend has simply continued to grow, and the current crop of talent at the Californian fight facility includes nine active UFC fighters, a UFC champion in Daniel Cormier and undefeated Bellator boss Liam McGreary.

The number of major MMA champions at AKA could double by year’s end, with Velasquez looking to get one over on Fabricio Werdum at some point in late 2015/early 2016, and middleweight star Luke Rockhold getting his shot at Chris Weidman‘s middleweight strap at UFC 194. Light-heavyweight boss ‘DC’ will collide with Alexander Gustafsson at UFC 192, 05-pound title holder Liam McGregary will take on Tito Ortiz at the Bellator-Dynamite collaboration come September and also top lightweight contender Khabib Nurmagomedov is close to returning to action.

The AKA brand recently extended their reach as far as Thailand, with a branch opening in Phuket, founded and co-owned by UFC veteran and AKA original Mike ‘Quick’ Swick.

So AKA has a lot to gain or lose in the next half-year, so let’s take a look at the ins and outs of the Amercian Kickboxing Academy’s next three UFC title fights. 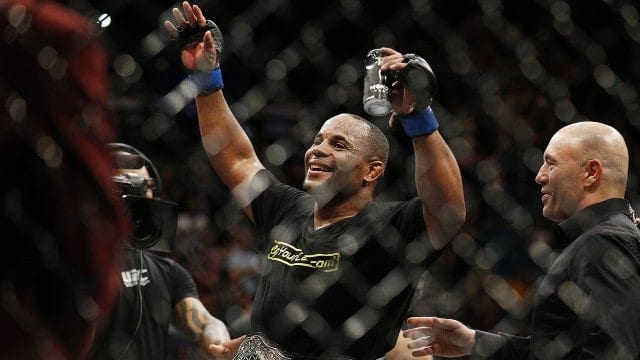 It was a rough start to the year for both Daniel Cormier and Alexander Gustafsson, as they each suffered seemingly crippling losses in the upper echelons of the UFC light-heavyweight division. Jon Jones defeated ‘DC’ by decision to end their feud at UFC 182, and Gus got knocked silly by Anthony Johnson, who later went on to lose against Cormier for the vacated strap.

With the beef with ‘Bones’ now in the rear view, ‘DC’ will look to improve on his career achievements by adding his first ever title defense, and his opponent ‘The Mauler’ will look to rekindle the very nearly glory days of his own fight with Jones back at UFC 165. Cormier is in place to get the gym’s run of form heading out of 2015 off to a great start, but he is once again the smaller man in terms of stature.

What he lacks in size, ‘DC’ more than makes up for in speed, power and wrestling prowess, whereas ‘The Mauler’s’ chops arguably lie in the striking department. We saw the Swede dismantle Jones’ unbeatable aura in Canada nearly two years ago, but how will he deal with the takedowns and unrelenting pressure of Cormier?

If we learned one thing from Gus’ war with ‘Bones’, it’s that he can take a lot of punishment. Cormier is cut from the same cloth as his Swedish counterpart, training with former heavyweight champion and master of the grind Cain Velasquez, so you could easily make the assumption that this fight will turn in to a battle of attrition.

If that were the case, I could only see it going one way; Cormier wrestling his way to either a decision or submission victory, even in the stand up exchanges, I’d probably err on the side of ‘DC’s’ clinch work against the fence stifling Gustafsson’s lanky reach.

We can’t really take much from Gus’ showing against ‘Rumble’ earlier this year as he was starched in quick order, Cormier’s grind ultimately got the better of Johnson at UFC 187 soon after, and if only MMA math worked I’d be a millionaire.

Daniel Cormier-Do what you are best at, wrestle the hell out of this guy and make him breath heavy, grind him against the fence and take length and reach out of the equation. Don’t stand anywhere near the end of Gustafsson’s kicks and punches, and don’t forget about his knees and elbows in close.

Alexander Gustafsson-Do try and utilize your length at every possible opportunity, punish the shorter wrestler with as wide a variety of strikes as possible and keep him guessing what’s coming next, use as many elbows in close as possible. Don’t try and get in to a war with this guy, ‘DC’ is the king of the grind and doesn’t care if this fight is pretty or ugly, also don’t try and take a rest.

Predictions to come at a later date, on to Rockhold/Weidman… 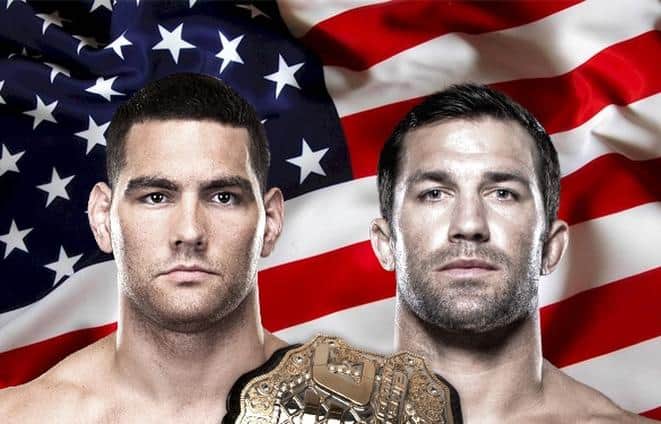 UFC middleweight champion Chris Weidman and his AKA counterpart Luke Rockhold present an interesting riddle in the UFC 194 blockbuster PPV main event. Both have world class grappling, ‘Rocky’ is a Brazilian Jiu Jitsu black belt with world championship titles to his credit, ‘The All-American’ started his combat life as a NCAA Division I wrestler, but has since gone on to become a formidable BJJ black belt too.

Weidman’s striking is what has surprised most though, as he sensationally blasted Anderson Silva at UFC 162, and has since gone on to outstrike the tricky Karate master and former 205-pound boss Lyoto Machida. Rockhold has some nasty kicks that he recently used to dispatch Costa Philippou, but has been displaying some snake-like submission skills in the form of a guillotine, a rear naked choke and an inverted triangle-kimura against Lyoto Machida, Michael Bisping and Tim Boetsch respectively.

So where will this fight go? On paper these guys are very evenly matched, and you could easily argue that each has their own ways of winning from almost any position. Weidman’s high pressure game has proved impossible for anyone to deal with so far, but the AKA standout and former Strikeforce middleweight champion is currently experiencing the best form of his career too.

Chris Weidman-Do use your pressure striking to back Rockhold up against the cage, keep him guessing with takedowns to but be wary of his slick submissions on the ground, he might be baiting you. Don’t let Rockhold connect with kicks in the exchanges, they are arguably his best weapon in the striking, don’t get caught in the Muay Thai when pressuring for the takedown and definitely don’t let this get top position for any amount of time.

Luke Rockhold-Do counter with kicks, your leg reach is by far your biggest advantage physically, use your wrestling and submission game as much as possible but try to keep this fight standing if you can. Don’t back-pedal, Weidman loves to catch dudes going backward with those big hooks, don’t let your back touch the fence and DO NOT get in to a slugfest.

Finally we have Fabricio Werdum vs. Cain Velasquez 2…. 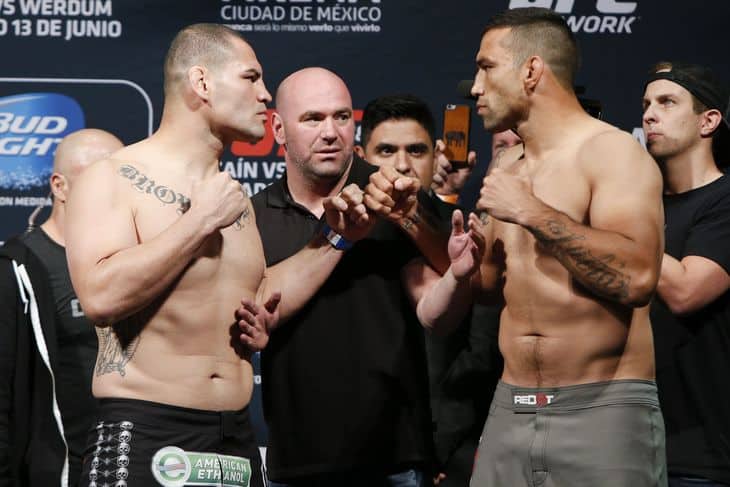 In a division fraught with huge potential rematches, newly crowned heavyweight champion Fabricio Werdum will make his first defense against the man who held the belt for three years, Cain Velasquez. ‘Vai Cavalo’ upset the odds at UFC 188, crushing Velasquez in the third round of their Mexico City slugfest with a submission win.

The Brazilian became the first man to submit the Mexican boss, and the rematch was recently confirmed, albeit without a date or event in mind just yet. Whether you agree with Velasquez’s conditioning playing a role in his performance or not, it’s likely that shouldn’t be a factor next time around. Even if the UFC decides to book the rematch in the same arena, the former champ should have learned a very valuable lesson in his loss, and you’d imagine he’d be well prepared for an early camp if that were the requirement.

Werdum had surprising success in the department that few expected him to, the striking, landed frequently with the jab to bloody up the former champion’s face. In the end it was the Mexican’s main strength that was his undoing, as he fell from a takedown straight in to a tight choke before relinquishing his belt with a tapout.

For Werdum it was a coming of age, and for Velasquez it was a harsh lecture in the field of combat. We’ll know whether he had underestimated ‘Vai Cavalo’ at UFC 188 by how the rematch goes, we’ll also know if Werdum simply has the former champ’s number in the octagon. In terms of predictions, this one is actually pretty tough to call.

Fabricio Werdum-Do try and be smart with your striking and conservative with your energy throughout, be prepared for a gruelling five-round war and also to work from your back. Don’t try and replicate your last win, as the champion the most important thing is to take home the belt, don’t try and get in a striking war with ‘CV’ as it could prove to be foolish, even after your last win against him.

Cain Velasquez-Do try and mix your striking style up a little, bring something that Werdum hasn’t seen from you before, do remain confident in the wrestling department, he’ll exploit the fact that you might be hesitant to jump his guard again if he senses it on fight night. Don’t get in open striking exchanges too often, don’t let this guy out of your clinch and off the fence, and most certainly don’t stick that chin to the side of Werdum’s rib cage where he can wrap up another choke during a takedown.

Skip to the next page for some cool videos! 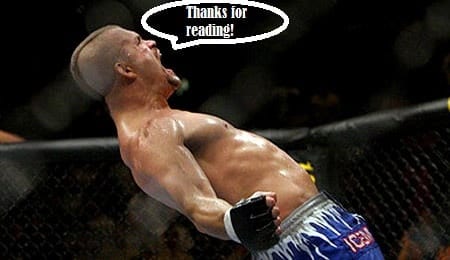