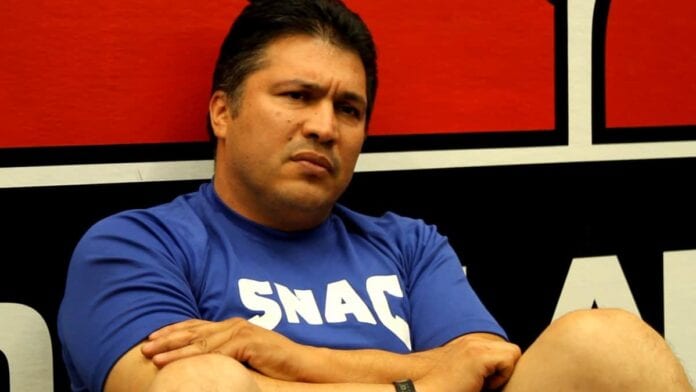 Javier Mendez immigrated to San Jose from Mexico with his family when he was just six years old. He grew up watching Kung Fu movies and idolized Bruce Lee.

When he was 15, Javier Mendez got into kickboxing and started competing at the amateur level. He got good fast and knew that he wanted to become a professional kickboxer.

Javier Mendez won numerous amateur kickboxing titles during his teens before becoming a professional. Before turning pro he had an exhibition match with Bill “superfoot” Wallace, a legend in karate and kickboxing.

When he turned pro, he wanted to create a team of kickboxers to help each other train for fights. This was how he established the American Kickboxing Academy. To help his fighting career, while also teaching a small number of students kickboxing.

Throughout the mid 80s, he would fight professionally for the ISKA Federation. Winning his first world title in 1992 becoming the ISKA Light-Cruiserweight Champion. He would defend the belt for 2 years before moving up and winning the light heavyweight title

While he was fighting professionally, Mendez would also become an established kickboxing coach. Coaching many pro and amateur champion kickboxers during the 1990s.

Javier Mendez became an MMA coach by chance in 1997, when a UFC fighter named Brian Johnston came to his gym. Johnston was a San Jose local that wanted to work on his kickboxing.

Since California was a hot spot for the growing sport, other MMA fighters would start seeking Mendez out.

This gave Javier Mendez the idea to start teaching kickboxing to MMA fighters. The sport was still fairly new and the fighters needed to improve their striking abilities.

Under Javier Mendez’ coaching, Shamrock  would never lose a fight in the 7 years he trained with Javier. Winning the inaugural UFC light heavyweight champion and defending it 4 times during this period.

During the first decade of the 2000s was the UFC boom and AKA was in the middle of it. They became known as one of the best MMA gyms in the world.

With numerous of the top fighters within the UFC training there with Javier Mendez. This included members of the inaugural season of the Ultimate Fighter in Josh Koscheck and Mike Swick.

As the sport continued to grow, so would Javier’s gym. This would only be the beginning of AKA’s rise of being one of the best MMA gyms in the world.

Javier Mendez and AKA played a big role in the San Jose based promotion Strikeforce. This was due to the promoter Scott Coker being one of Javier’s first taekwondo teachers.

Their connection led to fighters from AKA to headline Strikeforce events and sell tickets. The promotion was a big jumping ground for the careers of some of AKA’s most prized fighters.

Names like Josh Thompson, Luke Rockhold, and Daniel Cormier got their start in Strikeforce. After the promotion was sold all of Javier’s best fighters in the promotion would move to the UFC.

Javier Mendez has coached numerous world champions, but there are a few names that stand out from the rest. Some of those names include Cain Velasquez, Daniel Cormier, and Khabib Nurmagomedov.

Cain Velasquez was one of the most dominant heavyweight champions during his run in the UFC. He entered the UFC in just his 3rd match and finished all but one opponent before his title fight.

Velasquez with Mendez in his corner would hold the UFC championship two times.

Another one of Javier’s best students is the recently retired Daniel Cormier. After retiring from wrestling, Cormier wanted to try MMA and went directly to Javier at AKA.

Cormier would develop a high level striking game with Mendez to go along with his elite wrestling ability. It would prove to be an effective combination.

Daniel became one of only a few UFC fighters to hold titles in 2 different divisions. He is both considered a top 5 all time great fighter in the light heavyweight and heavyweight divisions.

Javier wasn’t his main coach, but he played a huge role in the career of arguably the MMA GOAT Khabib Nurmagomedov. Once Khabib got to the UFC, he needed a place to train in the US and his first choice was AKA with Javier.

Mendez helped develop Khabib’s striking ability to add to his elite wrestling ability. Khabib went undefeated in his career and retired as the lightweight champion. No other MMA fighter has accomplished this feat.

Javier Mendez has achieved so much in combat sports that you would probably forget something if you made a life. He was a champion fighter, then transitioned to becoming one of the all time best MMA coaches.

During modern MMA, there has rarely been a time period where an AKA fighter was not a world champion. Mendez is the only MMA coach to ever have 3 fighters hold UFC titles at the same time. This feat was accomplished in 2015, when Cormier, Velasquez, and Rockhold all held UFC gold.

AKA has also grown along the way and is a staple of MMA in the west coach. There has even been an affiliate gym in Thailand established.

Javier Mendez and AKA have played a big part in the growth of the sport. He and his gym will continue to grow and continue producing more world champions.