LowKickMMA.com
Home Boxing News Anthony Taylor calls for fight with Floyd Mayweather, gets laughed out of... 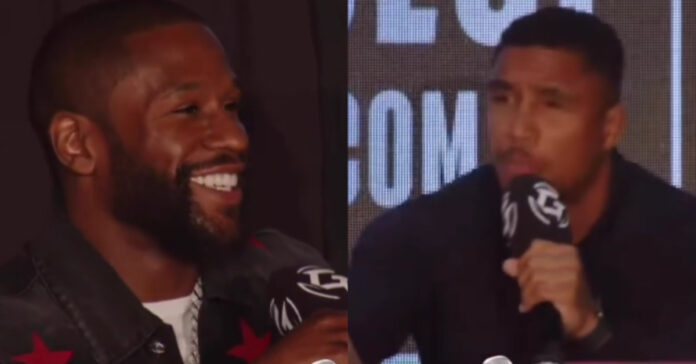 On November 13, Floyd Mayweather will return to the squared circle for an exhibition bout with YouTuber Deji Olatunji.

Emanating from Coca-Cola Arena in Dubai, the event features a stacked night of fights that includes Tommy Fury competing in the co-main event and the boxing debut of former WWE Superstar and current AEW wrestler, Bobby Fish.

The card will also feature Anthony Taylor, an accomplished mixed martial artist who has competed under the Bellator banner. Taylor is most notable for being Jake Paul’s sparring partner. During a media event ahead of the boxing showcase scheduled for next weekend, Taylor decided to go into business for himself, jumping on the microphone and lobbying for a fight with Mayweather in a rant that left everybody in attendance feeling a bit awkward.

“Lets be honest, what I think we really want to see is ‘Pretty Boy’ Anthony Taylor vs. ‘Money’ Floyd Mayweather. Now that’s a fight! Personality, personality. I’m the most qualified fighter to be fighting Floyd Mayweather in exhibition. I fought on Showtime. Some of the biggest fights ya’ll ever seen on pay-per-view. I deserve to fight Floyd.

Floyd Mayweather did his best to try and respond to Anthony Taylor’s comments but was hilariously stopped short of completing his thought.

“We all gotta be respectful. We all come from… We all got a background where we come from. He may be a good fighter. I don’t know.”

At that point, a member of the live crowd could be heard yelling, “He stinks,” getting a noticeable laugh from many of the media members in attendance and Mayweather himself.

Anthony Taylor currently holds a record of 7-5 in mixed martial arts per Tapology, but he is yet to find much success inside the squared circle. In five career professional boxing bouts, Taylor holds a record of 2-3, most notably losing to Tommy Fury via unanimous decision on the undercard for Jake Paul’s first fight with Tyron Woodley. Taylor competed on the Paul vs. Woodley 2 undercard as well, losing to Chris Avila via majority decision.