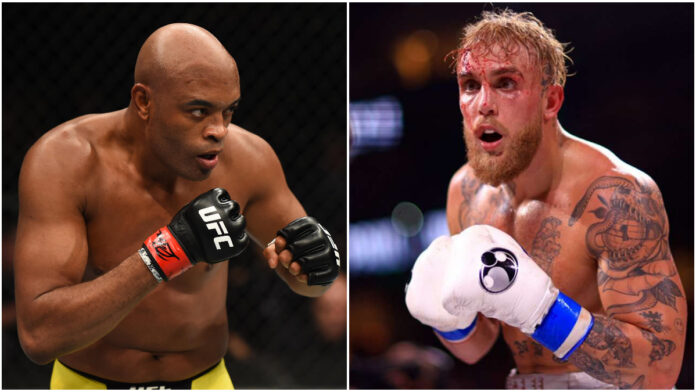 UFC legend Anderson Silva has been pursuing his venture in boxing and wants to compete against Jake Paul.

Former UFC middleweight champion Anderson Silva has expressed his desire to take on YouTube sensation Jake Paul in his next boxing match. Talks of the potential matchup have been rife in recent months with Paul going back and forth with multiple MMA stars. Michael Bisping fired back at the younger Paul for not talking about a fight with Silva as he called out retired fighters.

He may have retired over two years ago but he has not stopped competing. Known as the most lethal striker in the game, Silva would prove his chops in the sport of boxing.

Anderson Silva is slated to face Bruno Machado this weekend after the original event had to be delayed by a week due to the death of the UAE president. Speaking to Sports Illustrated ahead of the coming matchup, ‘The Spider‘ talked about his plans in the future and whether he will consider a bout against Jake Paul.

“It’s possible,” said Anderson. “People need to respect the Paul brothers. Those kids are talented, and they’ve opened people’s eyes about the good and bad in combat sports. I’m preparing my body for a challenge. We’ll see what happens.” (h/t SI)

‘The Spider’ looked unstoppable from the moment he got into the UFC. Winning his debut fight in the promotion, Silva would go on a mindblowing 16-fight win streak that saw him defend his title ten times in the proceedings.

Having last fought in mixed martial arts in October 2020, Anderson Silva chose to bring an end to one of the most illustrious careers in combat sports history. Following three consecutive losses towards the latter part of his career, the 47-year-old hung up the gloves in his final outing against Uriah Hall to move on to another adventure.

During his early days of competition, Silva once fought and defeated two opponents on the same night just hours separated from each other.

“That was many, many years ago. I was young. I could do anything back then,” Silva said.

Another iconic moment in his career came against Israel Adesanya. It was a passing of the torch by the old generation to the new and although Silva lost by decision, he still appreciates the memory.

“That night was very interesting, it was the meeting of two different generations. I showed him how much I loved fighting. It was a magic moment in my life.”

For now, ‘Spider’ is content with remaining in boxing and has indicated no signs of slowing down anytime soon.

“I made the transition from my MMA career to boxing, and I’m doing something I love,” Silva said. “I am training hard every day, so I’m not surprised at my success. I’m not impressed yet, either. I have a lot more work to do.”