LowKickMMA.com
Home UFC News Aljamain Sterling comments on his association with Andrew Tate; ‘We are so... 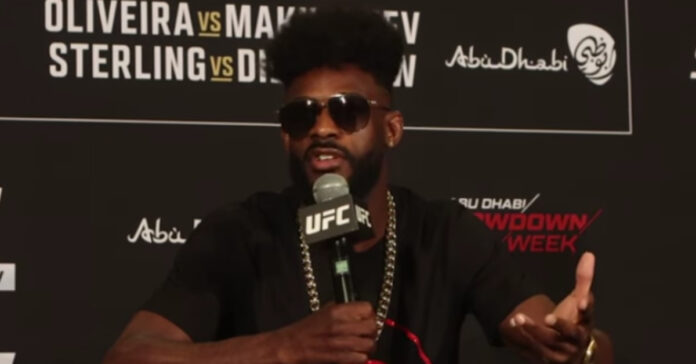 Aljamain Sterling found himself in some hot water with fans heading into arguably the biggest fight of his UFC career on Saturday. ‘Funk Master’ is scheduled to meet former two-time bantamweight titleholder TJ Dillashaw in the co-main event of UFC 280. Emanating from Yas Island in Abu Dhabi, Aljamain Sterling arrived ahead of his bout as most fighters do to acclimate to the weather and time difference. While there, Sterling also met up with some fellow combat sports stars including controversial kickboxer Andrew Tate.

Known for his disgusting anti-woman agenda on various social media platforms, Tate was also in Abu Dhabi with his twin brother Tristan in tow. The two brothers met up with Aljamain Sterling and posed for pictures which were posted by the UFC bantamweight champion with the caption:

“Top G’s never die. Good chopping it up with you fellas.”

Andrew Tate is average at best in the world of professional kickboxing, but he made a name for himself with his misogynistic views and horrifying comments toward women, including a 2017 tweet where he said that women who put themself “in a position to be raped” must “bare some responsibility.” That’s just the tip of the iceberg for the man that has already been banned from multiple social media platforms including Facebook, YouTube, Instagram, and Twitter. Despite that, Tate has continued to be a smashing success on social media, amassing more than 12 billion views on Tik Tok.

Needless to say, fans did not take kindly to Aljamain Sterling chumming it up with such a depraved human being. Fans immediately called out the UFC champ. ‘Funk Master’ seemingly just dug the hole deeper as he attempted to justify Tate’s words and his own association with the nefarious social media star.

During the UFC 280 media event on Wednesday, Aljamain Sterling was asked about his association with Tate and his engagement with fans on Twitter after posting the images of the two together in Abu Dhabi.

“So I quote-tweeted somebody that said what everybody else was saying that they were coming down on me for and I was agreeing with the tweet,” Sterling said. “And I said, ‘You’re right. I 100% agree with you that Andrew Tate should not ever say it is the responsibility of a victim. So people that were coming at me were completely wrong and I was trying to explain that you misread the tweet and then they would show me the same tweet and I would say you’re not understanding what I’m saying. You’re misreading the tweet because I’m quoting and I’m agreeing. I am on your side.

“I have 14-plus sisters. I love my mom. I would never tell my mom that if anything like that happened to them that ‘It’s your fault.’ That’s just the craziest thing to ever say to anybody. That’s like, if you’re in the hood, and you’re walking down a nice neighborhood or something and you’re a person of color and you get shot because you have a hoodie on that I’m telling you it’s your fault because you’re walking down the street. That doesn’t even make any sense. Why would I ever blame the victim? It’s the person that’s not taking the time to understand.”

While Aljamain Sterling never once discussed Andrew Tate directly, ‘Funk Master’ did make it clear that he does not condone victim-blaming.

“The clarity on that is I never victim-blamed anybody,” Sterling continued. “I think that’s the craziest thing to even make an assumption like that and if you don’t understand what I said, ask me to clarify, don’t start jumping the gun and start throwing labels and sh*t like that.

“I think people are really crazy and I think that’s the problem with the world today. We are so quick to condemn people instead of actually giving people a chance to reason and analyze what people are saying versus assuming and just making a judgment and being completely wrong. That’s just the world that we live in today. I don’t think it’s going to change anytime soon. With that said, hopefully T.J. Dillashaw moves the needle this weekend at UFC 280.”

Unfortunately, Andrew Tate has proven to be popular amongst other professional fighters. Aside from appearing with Aljamain Sterling, Tate has also met up with new welterweight champion Leon Edwards and fan favorite ‘Sugar’ Sean O’Malley.

What do you think about Aljamain Sterling’s association with Andrew Tate?