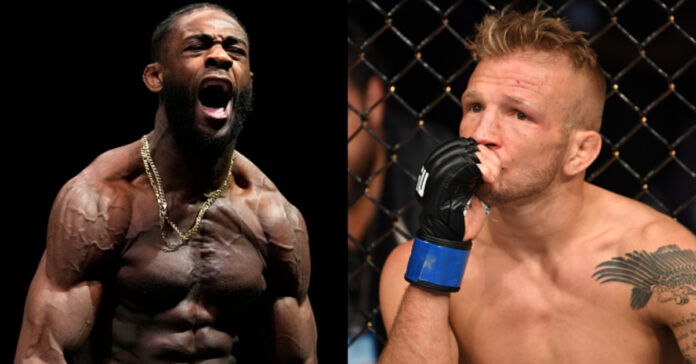 UFC bantamweight champion Aljamain Sterling will step back into the Octagon later this month as part of the absolutely stacked UFC 280 card.

The promotion heads back to Etihad Arena in Abu Dhabi for the biggest event of the year. Main evented by a lightweight world title fight between Charles Oliveira and Islam Makhachev, the bantamweight title will feature in the co-main event as Aljamain Sterling defends his title against former two-time bantamweight king, TJ Dillashaw.

‘The Funk Master’ sat down with James Lynch in a LowKick MMA exclusive to discuss the impending world title showdown. Before getting to the subject of Dillashaw, Aljamain Sterling first addressed his detractors. Specifically, those that refuse to accept him as the true bantamweight champion following his split decision victory over Petr Yan at UFC 273.

“There’s still some people saying what they’re saying, grasping at straws for why their boy (Petr Yan) lost and why they still think I lost the second fight, but for me, all that’s just noise. It doesn’t matter. I did what I had to do and I think if you watch that fight, anybody with common sense can see that I clearly was the better guy that night.”

On October 22nd, Sterling will meet division rival, TJ Dillashaw. As most fans know by now, Dillashaw received a 12-month suspension from the NYSAC and a 2-year suspension by USADA in 2019 after testing positive for recombinant human erythropoietin, or EPO. Asked about fans that still back Dillashaw despite his unsavory history with performance-enhancing drugs, Aljamain Sterling said:

“Fans are gonna be fans. I guess they like cheaters. Some even think it would be better if we were still allowed to do that stuff. Like, no penalties or anything like that. I don’t know. Some people are crazy, man. They don’t understand what the nature of the sport is, what we’re actually trying to do. They can say whatever they want until they’re the ones that are actually in there.”

Dillashaw returned from his suspension in July 2021, defeating Cory Sandhagen via split decision. More than a year later, he steps back into the Octagon. Asked how that long layoff may affect his opponent, Sterling was direct in his response, saying that Dillashaw’s issues are not his concern.

“I’m not even thinking about it at all. I’m worried about me. I have to worry about him just for the things that he does in terms of his tendencies, skill set, that type of thing. Outside of that, everything is focused on myself. I guess being injured is part of how he is right now, but I’m not really looking at that.

“I’m just looking at what he brings to the table in terms of an athlete and competitor. That’s the main premise of this training camp. It’s not really about TJ’s injuries. Is he the same? I don’t give a sh*t about that. He needs to worry about that. Not me. My job is just to go in there and punch this guy in the face, strangle him and get him out of there.”