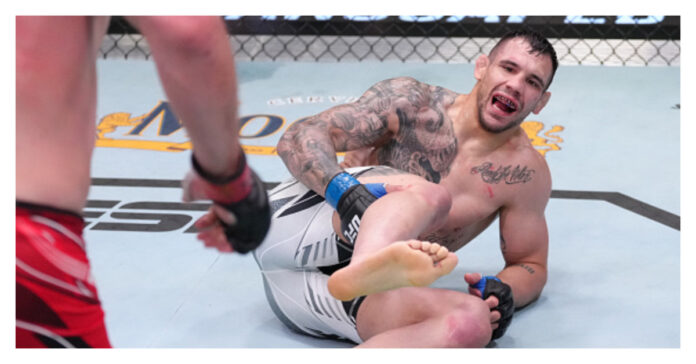 Competing against former UFC light heavyweight champion Jan Blachowicz at UFC Vegas 54, Rakic suffered a fight-ending knee injury in the third round. Devastated by the loss, ESPN MMA captured Rakic’s emotional walk to the back with the help of his corner.

Rakic can be heard saying, “I let you down” as tears streamed down his face once backstage.

While appearing on the ESPN+ show ‘UFC Journey’, Rakic talked about the aftermath of the bout, the injury he suffered in training, and what comes next.

“It happens, you know. What can I do? God had other plans with me tonight. My knee popped. My right knee. This knee I injured three weeks ago on a training. In a sparing. It happened. It’s not a lie, it happened. The knee wasn’t 100 percent. I thought it was. I’m just a little bit sad about the outcome of the fight, but I will never put my head down. I will come back stronger. I’m gonna go back, work my f*cking a** off. My dream is to be the champion.”

ESPN’s post-fight video also includes Blachowicz celebrating the victory with his team. Blachowicz was in danger of losing the bout via doctor’s stoppage after a strike appeared to cut the inner part of his right eye.

“Doctors say it was so close to stop the fight,” Blachowicz said. “When I saw the face of the doctor he was like [horrified look]. It was a little bit scary but the second doctor was ‘No he’s good.’”