LowKickMMA.com
Home UFC News Glover Teixeira Declares He Will Retire At The end of 2022 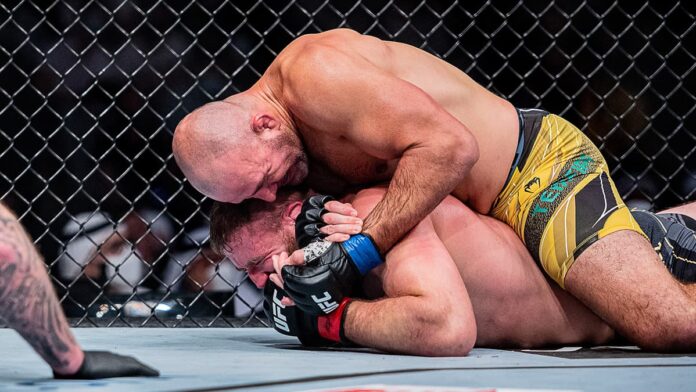 Reigning UFC light-heavyweight champion Glover Teixeira has stated that he plans to retire at the end of 2022.

Aged 42, the Brazilian shocked many when he snatched the light-heavyweight title from Jan Blachowicz last October, to become the oldest first-time UFC champion.

Now, however, after a long and illustrious career, Glover Teixeira’s retirement is in sight, as he reveals that he will only fight two more times, the first being against Jiri Prochazka on June 11, with his final bout targeted for November.

“The perfect plan would be winning this fight, which I have full focus on,” Teixeira said on the Mundo da Luta podcast. “And fighting one last time in November, in New York, which is close to the city I live for 20 years, and close to my gym. It would be my farewell from fighting. That’s what I’m thinking right now.”

If all goes according to plan, and Teixeira wins his final two bouts, he would cap his career off with a legendary eight-fight win streak. So far the streak contains names such as Blachowicz, Thiago Santos, and Anthony Smith.

“I’ll be 43 in November,” he said. “Regardless of being at the top, being the best of the world or not, I wanna stop this year. It will probably be my last year. I don’t wanna make this decision after a fight, but it’s what I’ve been thinking for a while. I don’t wanna retire like [Henry] Cejudo, who keeps asking for a fight all the time. I want to retire and stay cool.”

“I think that’s the perfect plan. The perfect plan is to retire with the belt this year, but we have a lot to do. We have to see if it could be in New York, and I still have to beat a guy that is tough as hell. That’s my idea.”

Teixeira is set to make his first title defense on June 11, headlining UFC 275, in Singapore. Standing opposite will be feared Czech striker, Jiri Prochazka, who, in just two fights with the UFC, finds himself with a shot at UFC gold.

In his first, he made quick work of former title challenger, Volkan Oezdemir, flatlining him with a right hand in the second round. His second bout came against Dominick Reyes, who was coming off two straight title challenges. The bout produced an exciting back and forth, but Prochazka’s creativity ultimately proved too much in the end, brutally knocking out Reyes with a spinning elbow.

Is this the right time for Glover Teixeira to retire?