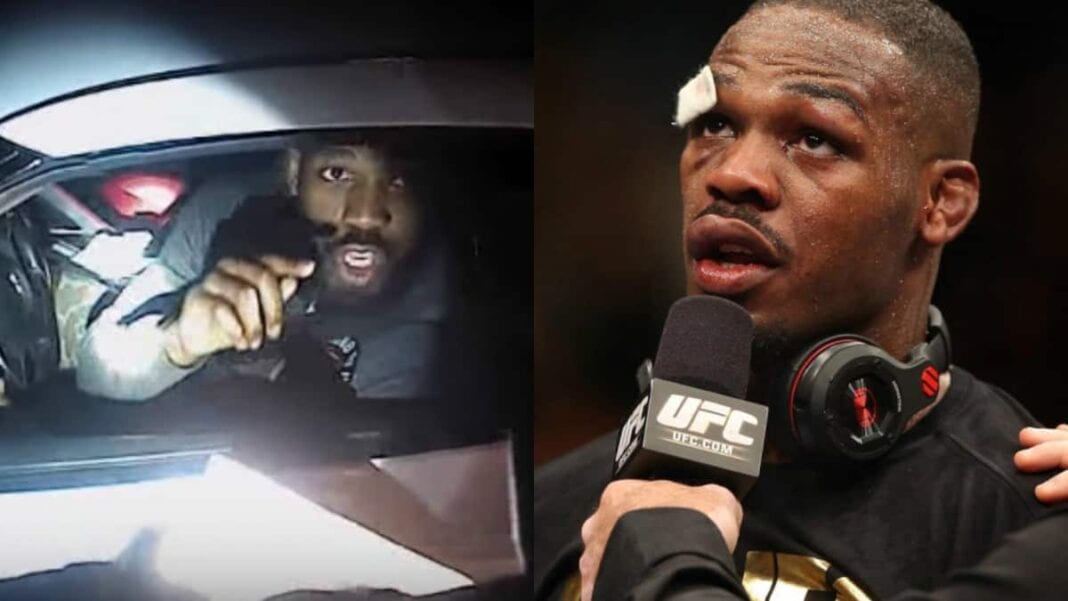 This weekend’s (Sat., April 23, 2016) UFC 197 at the MGM Garden Arena in Las Vegas, Nevada, is right around the corner, and it’s looking to be a great card for fight fans to enjoy.

The tumultuous card features two title bouts, the return of a legend, two hungry up-and-comers, and so much more.

While there are many reasons to to be excited for this card, let’s take a look at the top six reasons you should watch UFC 197 this Saturday night….. 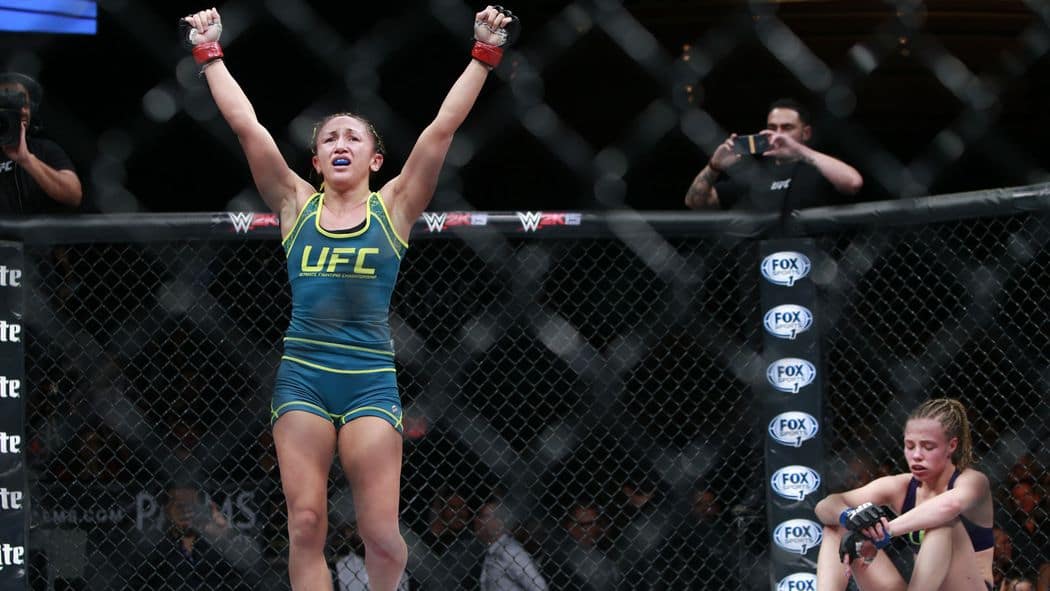 6. The Return of Carla Esparza

After dropping her title to current reigning women’s strawweight champion Joanna Jedrzejczyk, inaugural former 115-pound champion Carla Esparza makes her return to the Octagon after more than a year-long layoff from the cage.

The last time we saw Esparza she failed to survive the onslaught of striking put on her by Jedrzejczyk, which resulted in her being stopped in the late seond round of the fight. Esparza (10-3) is looking to regroup and make her way back into the title picture by taking on a very game Juliana Lima.

Lima (8-2) is on a two-fight winning streak, suffering her most recent loss to the current champion Jedrzejczyk as well. Lima’s tremendous ground game matches up interestingly with Esparza’s wrestling/ground and pound. Will the “Cookie Monster” return to form and jump back into title contention? 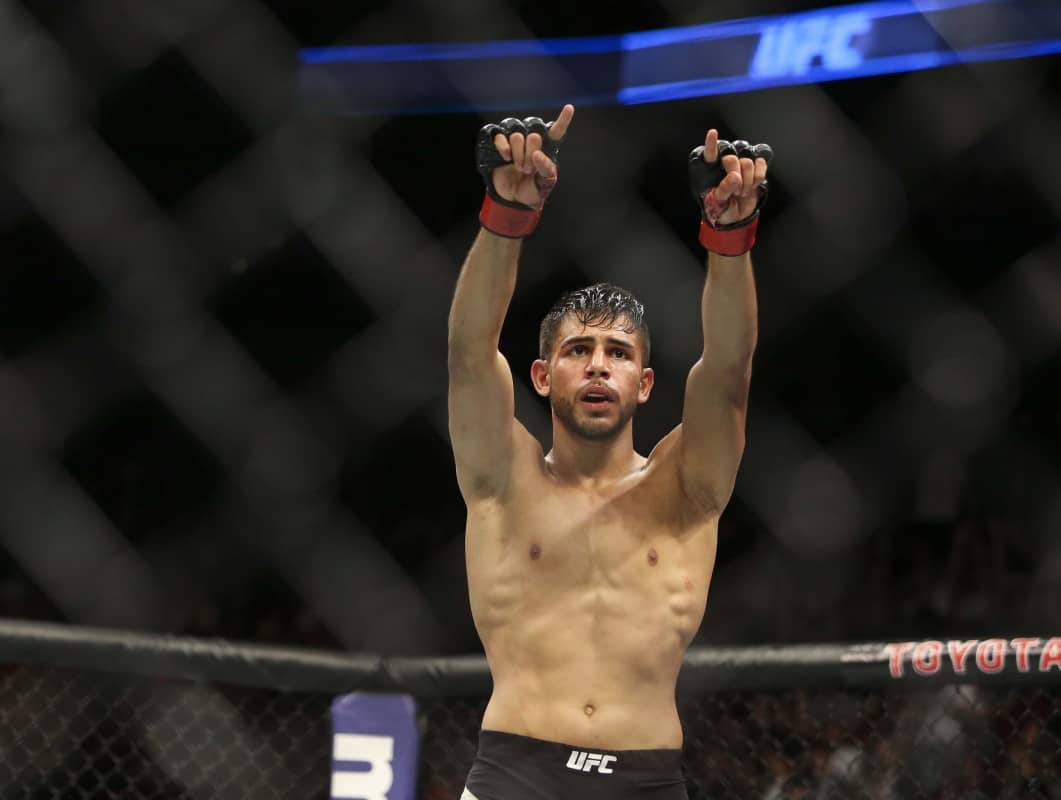 5. The Yair Rodriguez Hype Train Looks To Roll On

Rapidly improving featherweight Rodriguez is so diverse with his attacks that he takes risks unlike anybody we’ve ever seen in the octagon today.

He is highly thought of as one of the hottest young prospects on the UFC roster today. The Ultimate Fighter (TUF) Latin America season one featherweight winner made his name known at UFC 188 in his bout against Charles Rosa. Rodriguez showed off an amazing offensive arsenal and a tremendous amount of heart in the unanimous decision victory.

Rodriguez (6-1) possesses some explosive athleticism and is very good on the ground, so he takes risks without fear of being taken down. Rodriguez will take on Andre Fili, who is a great striker coming off of a first-round knockout victory over Gabriel Benitez this past November in Mexico.

Fili (15-3) has won two of his last four fights and is looking to put together a win streak, as well as putting a halt to the Rodriguez hype train in the process. Rodriguez is on a roll with a load of hype behind him, while also possessing some of the most tremendously exciting striking we’ve seen in awhile. Under the tutelage of the Jackson Wink camp these past six months, expect “El Pantera” to be even more dynamic. 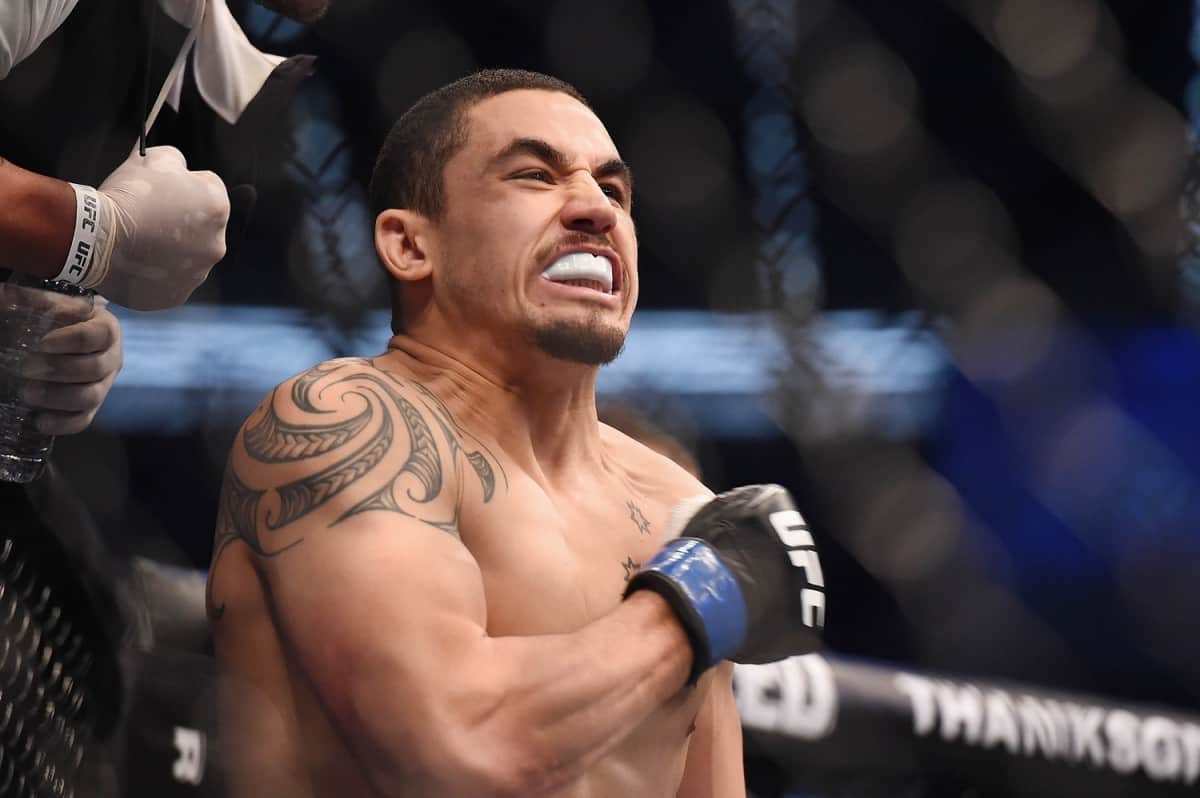 4. Robert Whittaker Continues His Climb In The Middleweight Division

Robert Whittaker is the face of MMA in New Zealand, and is coming off of a huge win over Uriah Hall at UFC 193 back in November. Whittaker out-struck Hall and even worked in some nice ground and pound after a successful takedown.

Whittaker (15-4) is on a four-fight win streak  and has a lot of hype behind him. Whittaker meets Rafael Natal, who is riding a four fight win streak of his own, including most recently a TKO win over Kevin Casey in January. Natal (21-6-1) possesses a tremendous ground game complemented by a black belt in Brazilian jiu-jitsu under Renzo Gracie.

Whittaker’s explosive striking and vicious ground and pound could be the key to winning this fight, as he clearly has the striking advantage heading into the bout. The New Zealender’s future is looking very bright as of late, and with a win over Natal means he could be poised for a top five opponent in the near future. Perhaps the winner of Ronaldo “Jacare” Souza vs. Vitor Belfort at UFC 198? 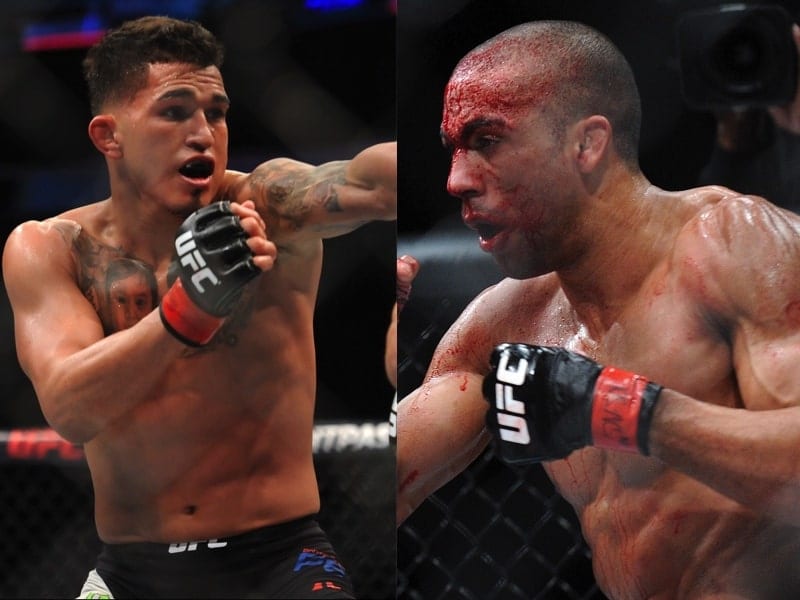 This is gonna be a fun one. Anthony “Showtime” Pettis has recently been on a decline after dropping the UFC lightweight Championship to Rafael dos Anjos, and getting grinded out by No.2-ranked lightweight Eddie Alvarez in his next fight at UFC Fight Night 81 earlier this year.

Pettis (18-4) is looking to bounce back into the title hunt with a win over another flashy knockout striker in Edson Barboza. You may know Barboza (16-4) from his highlight reel spinning kick knockout of Terry Etim at UFC 142. Barboza recently faced Paul Felder in Chicago back in February, in which the two men put on a striking palooza that Joe Rogan described as “a Muay Thai fight with MMA gloves”.

Barboza would go on to win the bout via unanimous decision. Following that, Barboza suffered a loss of his own against Tony Ferguson via D’arce choke in the second round. With both fighters coming off losses, these two are looking to get a win to jump back into the contenders conversation.

Barboza possesses some great stand-up and unique striking techniques, while Pettis’ submission game and dynamic attacking style makes this one an interesting fight to watch. Pettis wants to climb his way back up the ladder to potentially rematch Rafael dos Anjos for the title he lost back in March of last year. This one has all the ingredients to produce a show-stealing spectacle that’ll leave MMA fans talking for years to come. 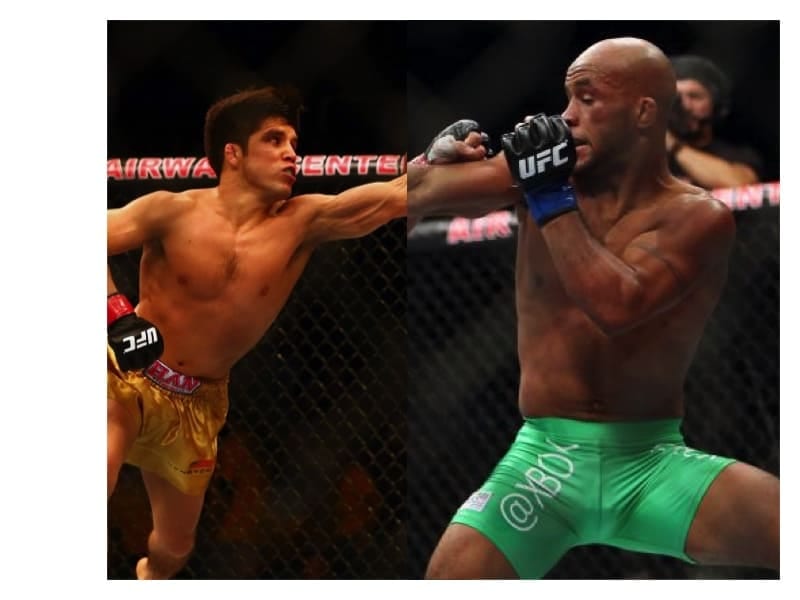 2. Is There Such A Thing As A Mouse Trap?

Demetrious Johnson is set to defend his flyweight title once again, and this time it’s against the touted Olympic gold medalist Henry Cejudo.

Cejudo (10-0) has elite wrestling due to his Olympic background, and some magnificent Muay Thai to boot. Indeed, “The Messenger” is an extremely speedy and powerful striker who mixes in his takedowns well.

Cejudo has been looked at as the man to potentially give “Mighty Mouse” a run for his money by many, however, it was assumed he’d have more fighting experience before doing so. Alas, Cejudo’s confidence has not dwindled as he has labeled himself  “The Mouse Trap” ahead of the flyweight title bout with “Mighty Mouse”.

Johnson (23-2-1) is possibly the pound-for-pound best fighter on the planet. “Mighty Mouse” is so technically smooth to the point of having no equal and has ruled the flyweight division since its inception in 2012. Johnson has finished four of his last six fights, and most recently won a dominant unanimous decision victory over John Dodson.

Cejudo is definitely the biggest threat to “Mighty Mouse’s” throne, but will the flyweight king prevail once again? 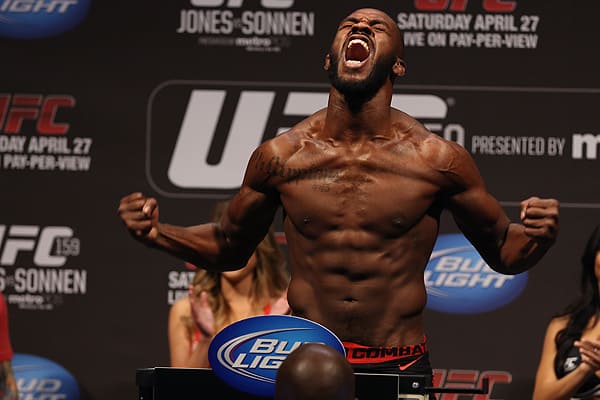 1. The Return Of Jonny “Bones” Jones

Jon Jones is back, and this time he’s the healthiest he’s ever been in his entire career. Jones is coming off an over yearlong layoff after being suspended by the UFC and stripped of his light heavyweight championship due to a number of extremely poor personal choices.

Now Jones (21-1) is sober, in phenomenal shape due in part to his recent interest in weight training, and possesses a nasty hunger to reclaim the title he never lost.

Ovince St.Preux (19-7) is replacing current light heavyweight champion Daniel Cormier after an unfortunate leg injury that took place during training camp. This bout will be contested for the interim 205-pound championship, which gives even more motivation to both men. ‘OSP’ is coming off a unanimous decision win over Rafael Cavalcante back in early February, where the American looked solid if not spectacular.

Jones is coming after the title he held for almost four years and is more motivated than ever. The scary fact is that Jones was never 100% dedicated in any of his previous UFC victories, and the fact that he is finally sober does not bode well for anyone currently in the 205-pound division.

‘OSP’ is a phenomenal mixed martial artist and athlete, while Jones is a once-in-a-lifetime combatant with everything to prove ……but everything to regain.