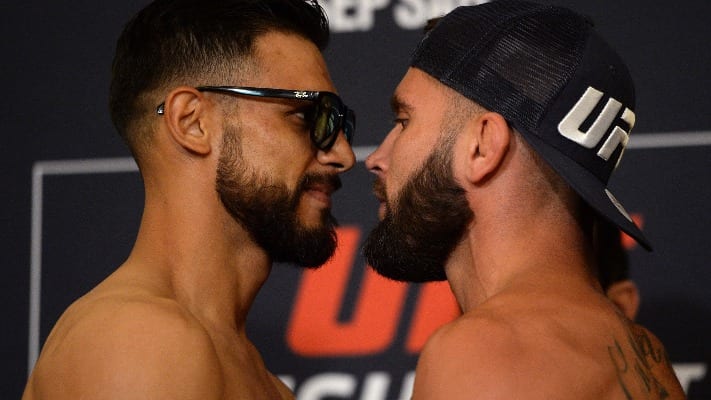 Yair Rodriguez and Jeremy Stephens can’t wait to get their hands on each other tomorrow night at UFC Boston. The pair initially met in the main event of UFC Mexico City earlier this year.

However, the fight started with an immediate eye poke from Rodriguez that was so bad that Stephens was unable to continue fighting. As a result, the fight was ruled a No Contest after just a few seconds of action. The angry Mexican crowd began tossing trash into the Octagon out of anger, with Rodriguez showing a ton of frustration for how the fight ended as well.

Rodriguez later claimed he believed Stephens was milking the eye poke for more than what it actually was. This sparked a physical altercation between the two in the lobby of their Mexico hotel. Now, the UFC has rebooked the fight for UFC Boston tomorrow night, and the bad blood continues to flow, as Stephens recently said he wants to “kill” Rodriguez when they fight Friday night.

“Cool as a cucumber. Calm like a bomb. Ready to go off. I’m gonna kill this kid. If he don’t die, it don’t count. That’s what I’m thinking. It’s always personal. It’s always personal when you fight, this kid’s trying to take money off my kid’s table. What if I was coming into your house, taking food off your table and smacking your kid?

Rodriguez recently responded to Stephens’ controversial remarks in a pre-fight interview with MMA Junkie. Here’s what he had to say. (H/T BJPenn.com)

“I think everybody has their own battles to deal with. If he thinks that way, then God bless him, bro, because he’s in the deep s*** right here. I think he already has a lot of problems in his life and stuff that he has to deal with that I don’t even want to really keep on pushing too much into his head.

“I want him fresh for this fight because he’s a tough opponent and I don’t want him to be weak. He’s just showing me that he’s weak, and I want him fresh. I want you fresh, bro.”

What do you think about Stephens saying he wants to “kill” Rodriguez inside the Octagon?