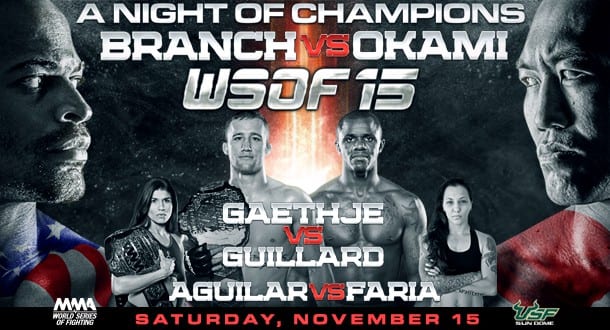 World Series of Fighting 15 went down tonight (November 15, 2015) live on the NBC Sports Network. Competing against Bellator as well as the UFC, WSOF put on a solid night of fights, showcasing a few of its biggest stars in multiple championship fights.

Former UFC veteran and middleweight title challenger Yushin Okami came into the night looking to obtain another belt for a different promotion; however, he didn’t have an easy time against current WSOF middleweight champ David Branch. After a rather boring first three rounds of clinch and ground fighting, Branch connected with a crisp shot in the fourth that stunned Okami. The champion followed up with a flurry of blows to finish off the Japanese born combatant to retain his belt.

Although the significance of the Melvin Guillard vs. Justin Gaethje lightweight title bout was drastically lowered when it was switched from to a non-title bout due to Guillard missing weight, it was still an interesting matchup between two dangerous lightweights nonetheless. The fight went all three rounds and consisted of an exciting stand-up battle. However, going deep into the fight it was clear that Guillard’s weight cut hurt him which helped Gaethje to grab a split decision victory. Check out video highlights below:

Also featured on the main card was another championship bout between current women’s strawweight champion Jessica Aguilar and challenger Kalinda Faria. Aguilar proved why she is widely regarded as one of the very best strawweights on the planet as she cruised to a unanimous decision win. Out striking and out grappling Faria, Aguilar was able to defend her title for the second time.

Opening up the main card was a battle between Jorge Patino and Eric Reynolds. Despite Patino being an older fighter at the age of 41, Reynolds did not see much success. Patino sustained heavy top control and used effective ground and pound on his way to securing a unanimous decision win.

Check out the full results below.