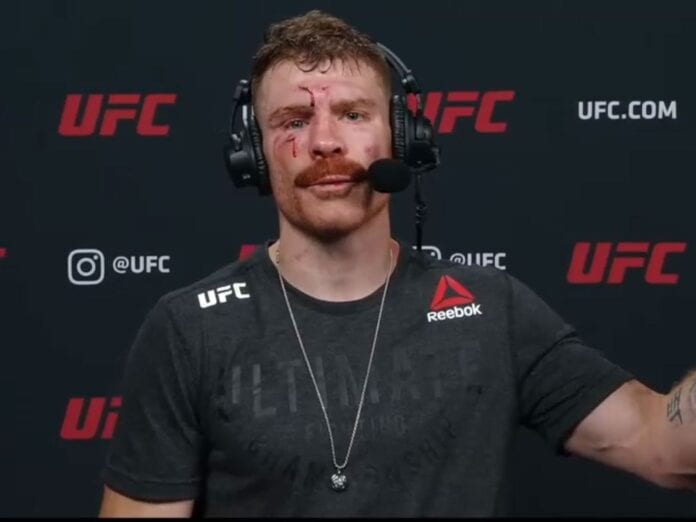 Paul Felder took a big chance in UFC Vegas 14 when he stepped in on five days notice to fight former UFC Lightweight champion Rafael Dos Anjos in a 5 round main event. The fight didn’t go his way with him losing a split decision (50-45, 50-45 and 47-48) however, it seems that Felder was in high spirits after the fight.

Paul Felder’s manager Brian Butler took a video of Felder speaking after the fight while getting stitched up. Felder spoke about a range of topics from what he was feeling inside the octagon to potential opponents.

You can watch the full 36 minute video below:

Felder said in the video “You forget about the money when you’re in there,” Felder says at one point. “You’re not thinking about the money when he’s kicking me in my ribs … and the coaches are yelling at you, ‘This is your cage,’ and you’re thinking, ‘Is it, though? He’s hitting me really hard.’” (Transcribed by MMAJunkie)

Even though Felder failed to get the win in last Saturdays main event, he still got Fight of the Night honours and he reiterated that he will not retire and said to expect him in 2021 in the octagon.

Speaking to Bisping in the post fight interview, Felder said “This was for my dad, this was for my family, this was for you guys. I lost my passion for this sport pretty bad and to all my Phili friends and family and teammates back home I love you guys, I miss you guys and I can tell you is I’m not done.”

“I might lose my ranking a little bit but what I’ve learned in this sport is none of that matters what matters is going out there and showing who you are inside, what determination you have, and for the guys who missed weight and couldn’t make it here tonight. Get your stuff together, hire a nutritionist, get on the scale, make weight, and go perform. I was dying on Thursday night to get on that scale at 156 pounds and I did it. And I showed up tonight for 25 minutes with no training, just training for a triathlon. So get your stuff together get your shit together and let’s go.”