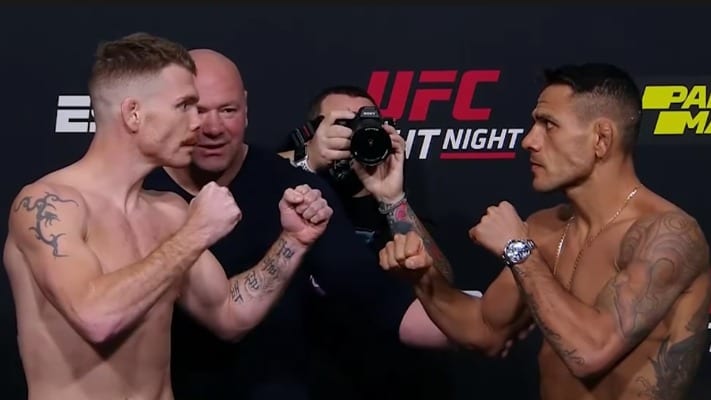 Next up on the UFC Vegas 14 main card is the lightweight headliner between Paul Felder and Rafael dos Anjos.

Round 1: Felder lands a couple of strikes but receives a big body kick from Dos Anjos. Felder land a knee to the stomach but receives a counter. Dos Anjos lands another body kick before going for the takedown. He gets Felder down and is in half guard. Felder gets to his feet but Dos Anjos still has control of him. Felder separates and they return to striking. Dos Anjos lands a body kick and follows it up with a left cross. Both fighters start swinging before they both go for a takedown attempt and clash heads a bit. Dos Anjos ends up getting control and has Felder clinched up against the fence. He lands a couple of elbows and a huge left but Felder eats it. The round comes to an end.

Round 2: Dos Anjos land a body shot and follows up with a body kick. Dos Anjos clinches Felder up against the fence but receives a knee. They separate. Felder connects with an inside leg kick. Dos Anjos lands a few lefts before shooting for a takedown. Felder defends but is clinched up against the fence again. Dos Anjos separates with an elbow. Felder slips and lands a right. Dos Anjos connects with another body kick. Much more striking going on now with Dos Anjos connecting with a big body shot. He goes for another takedown and manages to put Felder down. Felder gets to his feet soon after but RDA still has his back. Felder escapes and front kicks Dos Anjos. Dos anjos lands a heavy left to end the round.

Round 4: Felder comes out aggressive with a flying knee which misses. He misses a spinning backfist but continues to advance forward as he looks to keep the action in the center of the Octagon. However, Dos Anjos clearly has more stamina as he controls Felder against the fence again. Felder reverses but they separate soon after. Felder is swinging heavy but Dos Anjos is reading everything. Felder times a takedown perfectly but Dos Anjos is able to get up and reverse the position. The round ends and Felder is bloodied up from a previous left that opened a cut on his forehead.

Round 5: It’s all or nothing for Felder as he continues to be aggressive early on. He partially lands a head kick. He stuffs a takedown attempt from Dos Anjos soon after. However, RDA is able to clinch him up against the fence soon after. Dos Anjos lands some strikes from the clinch and separates before taking Felder down again. Dos Anjos attempts an arm triangle but Felder defends well. He continues to control Felder on the ground despite the latter’s scrambling attempts. Dos Anjos lands a number of knees which fatigue Felder even more. Felder gets to his feet but is taken down again as the fight ends. Should be a clear win for Dos Anjos.