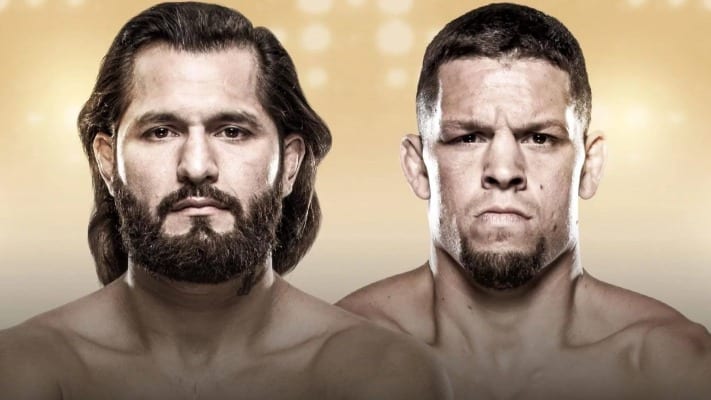 Nate Diaz and Jorge Masvidal originally fought at UFC 244 in New York City back in November 2019. What started as an exciting fight ended when a doctor stopped the fight due to the injuries suffered by Diaz at the hands of Masvidal. As a result, Masvidal went on to win the BMF belt and both fighters lost respect for each other in the process.

What’s next for these UFC veterans currently on deck? Let’s take a look at their current career profile and possible match-ups with other fighters besides their anticipated rematch.

Nate Diaz is a 37-year-old Welterweight class fighter that primarily practices Brazilian jiu-jitsu matched with a boxing style that keeps opponents at bay. Standing at 6 feet tall and 170 pounds, most of his wins are by submissions. Out of the 20 wins in his career, 11 of them (55%) were via submission.

Diaz is in the final fight of his contract. He has attempted to publicly set up fights with UFC greats such as Dustin Poirier, Tony Ferguson, and Vicente Luque, but nothing has come to fruition as of yet. The UFC has talked about extending his contract with new fights, but nothing has been finalized yet.

While he is a well-known favorite fighter in the UFC, Diaz has never been champion. If he can successfully extend his contract, he might have a chance to earn a belt sooner rather than later. Will Diaz take the BMF belt from Masvidal if and when there is a rematch? Or will he have to wait longer to grab a belt from another fighter?

Jorge “Gamebred” Masvidal is the same age as Nate Diaz. The Welterweight champ is the current holder of the UFC’s newly designated BMF belt thanks to his win against Nate Diaz at UFC 244.

Masvidal just signed a new contract, which will have other fighters vying for the BMF title belt besides Nate Diaz. Robbie Lawler, Rafael dos Anjos, Conor McGregor, and Nick Diaz (Nate Diaz’s brother) are other possible contenders that may be interested in taking the BMF belt.

Lawler’s nickname is “Ruthless”, which would make perfect sense for him to want to pursue the BMF belt. Nick Diaz may want to defend his brother Nate’s loss back in 2019. Dos Anjos has fought top contenders in the lightweight and welterweight division, which makes him BMF material.

Overview of the Nate Diaz vs Jorge Masvidal Fight

TMZ rumors that a rematch between Diaz and Masvidal will take place on December 12, 2022. The rematch has been anticipated since 2020, so it has been long-awaited. While the bout is not set in stone, both opponents have agreed to the rematch. Signing bout agreements are in the works for the months to come.

Try Novibet sports betting to place your bets during the long-anticipated Diaz vs Masvidal rematch. Remember to bet wisely and hopefully, the odds be in your favor!

Final Thoughts About The Diaz vs Masvidal Rematch

Diaz is looking to redeem himself from his loss to Masvidal at UFC 244 in November 2019 to take the BMF belt from Masvidal. He endured a 90-day medical suspension because of the injuries he sustained during this fight.

Both fighters are mainly strikers, which can make for an intense fight in the ring. As mixed martial artists with 1 inch in height difference and the same weight, their stats have them evenly matched as fighters. However, will Masvidal overpower Diaz like the last time or will Diaz take the win?