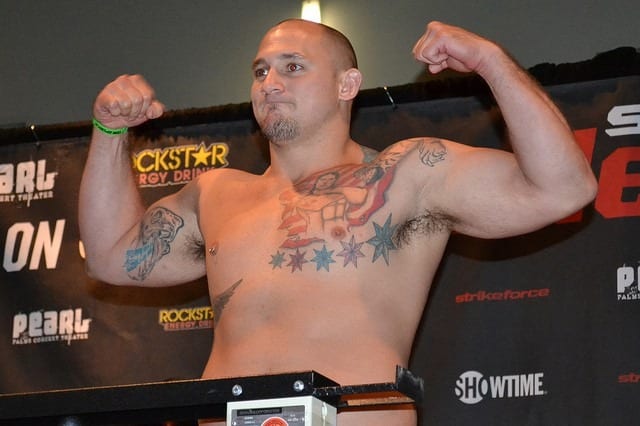 It’s once again fight day here at LowKickMMA, and the talent on display tonight (Saturday, June 6th, 2015) will come from the Smoothie King Center in New Orleans, Louisiana, in the form of UFC Fight Night 68.

Headlining the card are middleweights Dan Henderson and Tim Boetsch, but there were also some great fights and finishes on the event’s preliminary card.

We end the preliminary side of this card in a big way as the big men in the heavyweight division take center stage. Derrick Lewis swarmed Shawn Jordan to open round one, but Jordan used his clinch work and his takedowns to slow the pace of the fight. In the second round, Jordan landing a side heel kick to the jaw of Lewis that saw the big man fall to his back. Jordan swarmed and finished Lewis in this round.

In this welterweight between Omari Akhmedov and Brian Ebersole, there wasn’t much to it because the fight only lasted one round. Akhmedov seemed to be loosening up as the round went on with him landing a nasty leg kick to the knee of Ebersole that at the time was nasty, but nothing that you would think that would’ve put this fight in jeopardy. In between round one and two, Ebersole called the fight off due to a knee injury. The fight was decided as a TKO due to injury.

We stayed in the same weight class as Chris Wade showed off his stellar takedowns and wrestling while fighting at Christos Giagos. While this was not the most exciting fight you’ll ever see, Wade is a good prospect to look out for in the years to come. Wade went the distances with Giagos, who was gassed by the end of round two. Wade won the fight by unanimous decision.

This classic lightweight bout between Joe Proctor and  Justin Edwards begins the preliminary portion of this event on Fox Sports 1. Both men changed it up nicely throughout the rounds, but with just two seconds left in the third round, Joe Proctor locked in an uncomfortable guillotine choke to make Justin Edwards go to sleep and earn him the victory.

We change up to a much higher weight class to close out the UFC Fight Pass bouts as middleweights Jake Collier and Ricardo Abreu squared off, and was a barn burner. Both men threw some big shots that resulted in them both bleeding by the end of it. In the end, Ricardo Abreu’s late round wrestling couldn’t pull him to victory and Jake Collier earned the split decision win.

Opening the UFC Fight Pass prelims is a bantamweight bout that saw Jose Quinonez show his dominance in the first seconds of the round with devastating leg kicks. He landed a trip takedown into side control and worked over Leonardo Morales. After a nice sweep from side control to the back of Morales, he locked in the rear-naked choke in the very first round for the win.