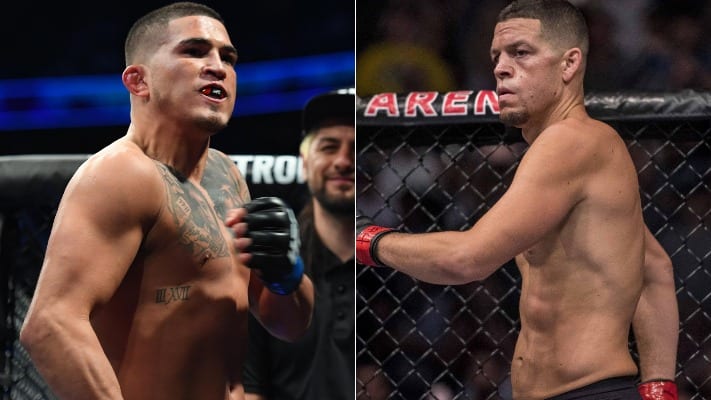 This weekend (Sat. August 17, 2019) we get to see Nate Diaz return to the Octagon for the first time in three years, as he takes on Anthony “Showtime” Pettis in UFC 241’s co-main event. With Diaz refusing to cut any further than the welterweight limit, and Pettis just moving up for his last fight, this fight will be contested at 170 pounds.

As far as their skill sets, this is a matchup made in heaven, but will the layoff affect Diaz? This fight has been talked about since Pettis was champion, as Diaz was continuously calling him out, but that fire for this fight seemed to die, until recently. Diaz and his team went to team Pettis asking for a fight, and Pettis’ team told the UFC to set it up, and now we’re here.

Now both parties are finishing their weight cutting processes and then they’ll fight on Saturday. It’s honestly quite surprising that this fight hasn’t been advertised or hyped more considering the potential it has. No matter who wins, it will certainly shake things up in the welterweight division.

We met Nate Diaz on the set of The Ultimate Fighter 5 back in 2007 as part of Jens Pulver’s team, opposite BJ Penn. He went 3-0 on his season with three submissions, then defeated Manny Gamburyan in the finale to claim “The Ultimate Fighter” trophy. He always had the same skill set, he’s just gotten better at it, a lot better. Diaz started off his UFC career as a BJJ purple belt and submitted three black belts in a row in his second, third, and fourth UFC fights: Junior Assuncao (guillotine choke), Alvin Robinson (triangle choke), and Kurt Pellegrino (triangle choke).

Nate fights just like his brother Nick. He pitter-patters with his punches, then as the fight goes on, he starts hitting a little harder (with some strikes) and putting on more of a pace. Diaz has insane cardio, he’s primarily a boxer with incredible BJJ skills, being a 2nd-degree black belt. The only difference between himself and Nick is that he has a slightly smaller frame, he’s a little more flat-footed, and his wrestling isn’t quite as good as his brother’s, though neither Diaz is known for their wrestling ability.

Diaz has shown many times, his boxing is some of the best in the entire sport of MMA. The way he can chain his punches together and overwhelm his opponents is quite fun and interesting to watch. The more he tags his opponents, his accuracy goes up and it oftentimes turns into a great fight. His brother was really the pioneer of this style, to hit his opponents with so many punches that they can’t breathe, rather than trying to starch them with one shot.

Being flat-footed however has led Diaz to being susceptible to leg kicks in the past, and has also been an entry for wrestlers to take him down. Pettis isn’t much of a wrestler, however, and it’s doubtful he’ll take that route. Pettis may attack Diaz’s lead leg though, amongst other things. Pettis’ attack is seemingly endless, he just doesn’t run out of tools. We’ve seen him create a few of his own attacks inside the cage in both the WEC and UFC, and do it effectively.

“Showtime” also holds a BJJ black belt, and has a 3rd degree black belt in Taekwondo as well, which he’s had for quite some time. Pettis was always known as a striker, but he’s always been just as good on the ground. Not only recently, he has a few submission wins in the WEC too, but his UFC submissions include Benson Henderson, Gilbert Melendez, Charles Oliveira, and Michael Chiesa.

Henderson was thought to be unsubmittable by everyone in the MMA world. But Pettis took another belt from Henderson yet again, via armbar this time. Melendez is a Cesar Gracie black belt, the same BJJ coach as the Diaz brothers, and had never been submitted before, but Pettis defeated him via guillotine choke.

Charles Oliveira broke the record for most submission wins in UFC history and broke his own record in each of his next two fights. Pettis defeated him via guillotine choke. Michael Chiesa is the only one of the bunch that isn’t a BJJ black belt, but he does have a purple belt, and submission wins over high-level BJJ black belts like Jim Miller, Beneil Dariush, and Carlos Condit. Pettis submitted Chiesa via triangle choke.

If this proves anything, it’s that Pettis can certainly submit just about anyone, he’s that talented on the mat. Then he showed he’s still got it on the feet by knocking out Stephen “Wonderboy” Thompson, who’s 57-0 in kickboxing with a black belt in American Kickboxing and a 5th-degree black belt in Kempo Karate, and had never really lost a stand-up fight until now.

As far as these two matching up together, Diaz is the taller man at 6′ with a 76” reach, and Pettis is 5’10” with a 72.5” reach. This could go a little bit like Pettis’ fight with “Wonderboy”, as “Wonderboy” was peppering Pettis’ face with his straight punches, keeping Pettis on the outside. Diaz could perhaps do that with his boxing, but what if Pettis’ kicks make that an even playing field? Maybe the length of Diaz’ reach won’t matter as much considering how good Pettis is at kicking.

Another interesting thing about this fight is that Pettis has much more developed hands than he really ever has. He hurt Ferguson down at 155 pounds, and he KO’d Thompson at 170 pounds, someone who’d never been knocked out. Pettis was always known as a kicker, but his hands have come along very well. It’s a wonder how this fight will go considering each guy’s skill set.

How does this epic welterweight showdown go this weekend?