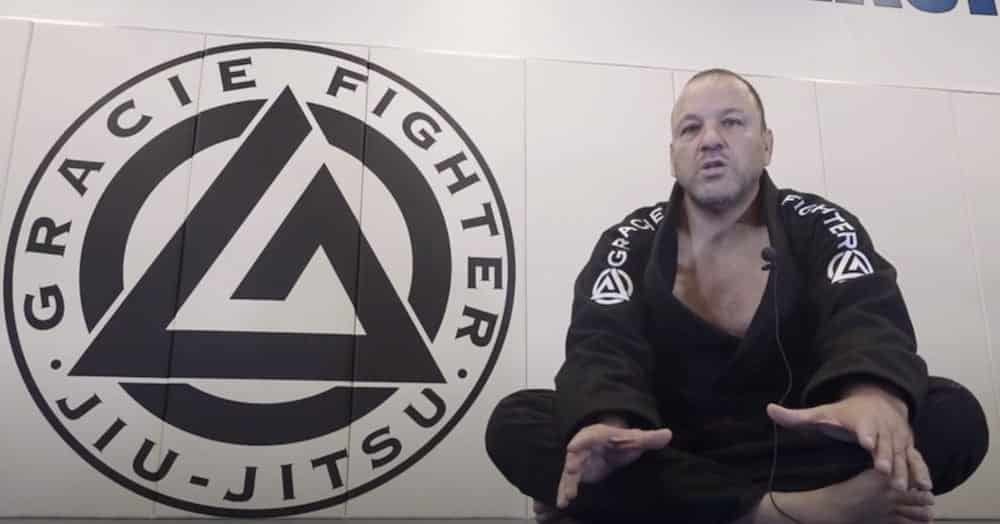 Cesar Gracie was born in the late 60s and is related to Carlos sr on his mother’s side. When he was a kid his parents separated and he went with his mother to live in the US.

Gracie would not really be involved in Jiu Jitsu until later in his life. He enlisted in the Marines after high school and wouldn’t return to Brazil until after his service was finished.

His time returning home would be brief before returning back to California. Upon returning, he sought out his relatives at the Gracie Academy and began training again.

Throughout his childhood and before going to the Marines, Cesar would train Jiu Jitsu on and off. Once he was done with the military, Cesar Gracie would then go back to training Jiu Jitsu full time.

In 1992, Cesar was awarded his black belt by Robson Gracie. During his time training at the Gracie Academy, he would also influence his cousins the Machado’s to move to the US.

Once he earned his black belt, Cesar Gracie then moved to northern California to open his own academy. He would bring his cousin Ralph with him, who would also eventually open an academy in San Francisco.

While during this time Cesar did not have an official fight record, he did participate in the infamous Gracie gym fights. Winning 14 of these fights against some that accepted the Gracie challenge.

He would only have one pro fight at 40 against Frank Shamrock that he lost by knockout.

Cesar Gracie opened his school in the early 90s in Pleasant Hill California. He would attract students from the rougher side of town in the area and especially from Stockton.

Gracie would gradually become a well respected Jiu Jitsu and MMA coach in the west coast. Taking those kids from rough upbringings and turning a few of them into the fighters in the world.

Another person that can be credited for helping Cesar build up his school was boxing coach Richard Perez. Along with Gracie’s Jiu Jitsu, they have trained some of the most well rounded fighters in the sport.

Today, Cesar Gracie has three different academies in California in Pleasant Hill, San Francisco, and Lodi. His students the Diaz brothers and Gilbert Melendez have also built their own academies that are loosely affiliated with Cesar.

Gracie and Perez are also still the Diaz brothers’ main coaches, who they train with regularly.

Cesar Gracie have created one of the most fearless MMA teams in the history of the sport. They all love to fight and never back down from anyone.

The pride of Stockton, Nick Diaz has been a fan favorite for many years. He has been a lifelong martial artist starting out in karate and Aikido, then going to wrestling and Sambo.

Diaz came to Cesar’s gym when he was around 17 with the goal to become a professional fighter. After turning 18, Nick would have his first pro MMA fight and not stop for training and fighting for 15 years.

In those 15 years, Nick had made quite a name for himself. He made his UFC debut when he was just 20 years old  submitting Jeremy Jackson. Then in his 2nd fight, he would start growing a fanbase from his famous KO win over Robbie Lawler.

Nick would then go to Elite XC and the Strikeforce, where he would win the welterweight title. Throughout this time, he was the same old Nick.

Not afraid to scrap and always said what he thought. He would return to the UFC, fighting for the title twice and lose a controversial decision to Anderson Silva.

After getting suspended or a positive marijuana test, Diaz became jaded with MMA and hasn’t fought since. His fans eagerly await his return.

The other pride of Stockton is Nick’s younger brother Nate Diaz. Nate has carved out a path all his own becoming one of the most popular fighters in the sport.

Like Nick, Nate has never backed down from a fight. He would start out having bare knuckle fights within Cesar’s gym, when he was just a teenager. Beating men twice his size and age with superior skill.

When he was 21, Nate was part of the Ultimate Fighter season 5 that he would win. From that point on, Diaz would have an historic 15 year run with the promotion that is still going.

Tying Joe Lauzon for the second most bonus awards with 15. What Nate is most known for is his 2 fights with former champion Conor McGregor.

Those fights with Conor were among the most viewed fights in UFC history. Nate has one of the biggest fan bases of any fighter in the sport and has done it all his way.

The other two more known fighters from Cesar Gracie’s camp are Jack Shields and Gilbert Melendez.  Shields won the Elite XC Welterweight title and the Strikeforce Middleweight title. The only fighter to do this and currently fights for the promotion PFL.

Gilbert Melendez was a 2x Strikeforce champion and fought in the UFC for 6 years. During the prime of his career, Gilbert primarily trained with Cesar’s crew and had much success. He is now semi retired and hasn’t fought in 2 years.

Cesar Gracie has carved out quite the legacy for himself at his west coast Jiu Jitsu gym. Highly regarded and respected as a great MMA and BJJ coach. Having helped train multiple champions and some of the most popular fighters ever in the sport.

Gracie will continue to grow his schools and train some of the world’s best fighters.